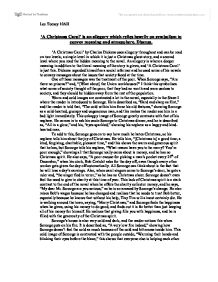 'A Christmas Carol' is an allegory which relies heavily on symbolism to convey meaning and atmosphere. Discuss.

'A Christmas Carol' is an allegory which relies heavily on symbolism to convey meaning and atmosphere. Discuss. 'A Christmas Carol' by Charles Dickens uses allegory throughout and can be read on two levels; a simple level in which it is just a Christmas ghost story, and a second level where you read the hidden meaning to the novel. An allegory is where a deeper meaning in addition to the literal meaning of the story is given, and 'A Christmas Carol' is just this. Dickens regarded himself as a social reformer and he used some of his novels to convey messages about the issues that society faced at the time. One of these messages was the treatment of the poor. When Scrooge says, "Are there no prisons?" and, "[What about] the Union workhouses?" I think this symbolises what some of society thought of the poor; that they had no worth and were useless to society, and they should be hidden away from the rest of the population. Warm and cold images are contrasted a lot in the novel, especially in the Stave I where the reader is introduced to Scrooge. He is described as, "Hard and sharp as flint," and the reader is told that, "The cold within him froze his old features," showing Scrooge as a cold-hearted, grumpy and ungenerous man, and this makes the reader see him in a bad light immediately. ...read more.

Scrooge's unhappy childhood may be one of the factors why he turned into an unhappy miser, and when he is reminded of this, he "sobbed" about his lost childhood. He is then taken to the same school some years later, where his sister, Fan, comes to collect him to bring him home. Whilst watching the scene, the Ghost talks to Scrooge about his sister. Scrooge loved his sister, and the Ghost reminds him that, "[She] had, as I think, children," and this is to try to get Scrooge to think about his nephew as the son of his beloved sister, and to get him to treat him better. After this, the Ghost takes him to his old workplace, at Fezziwig's. Scrooge remembers Fezziwig as a very good employer. He says, "The happiness he gives, is quite as great as if it cost a fortune," and this is where he starts to realise that you don't need to spend money to give happiness, you need to be kind. He then thinks about his clerk, and says, "I would like to be able to say a word or two to [him] just now," because he is starting to realise how badly he treats people, and this is what Marley set out to do. Then they go on to a park bench, where Scrooge sees himself sitting next to his old girlfriend, Belle. ...read more.

After this, the ghost takes Scrooge to the Cratchit's house. They are mourning the death of Tiny Tim, and Bob, "Broke down all at once," and Tim's death is partly Scrooge's fault, because Tiny Tim needs Scrooge's help like we all need each others compassion. Scrooge is then taken to a graveyard, where he sees his grave. Scrooge is distraught and says, "Assure me that I yet may change these shadows," because he has realised his fate if he doesn't change his ways. He then says, "The Spirits of all Three shall strive within me. After this, Scrooge wakes up on Christmas morning a changed man. The atmosphere in this final stave contrasts with the gloomy atmosphere of stave IV, and shows Scrooge's change of heart. Scrooge learns that he is doomed unless he shows more generosity and compassion, which is what Christmas itself is a metaphor for. At Christmas people feel compassion more, as it is a time where want is most keenly felt. In conclusion, without allegory, the meaning and atmosphere of the story wouldn't have the same effect on the reader. The symbolism in 'A Christmas Carol' is a vital part of the novel, which gives it a greater meaning and, in its time, raised issues about poverty, injustice and greed that were problems of society. ?? ?? ?? ?? Leo Teeney 10AH ...read more.