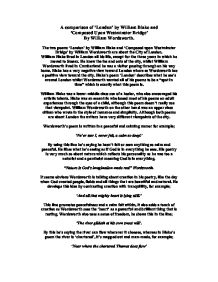 A comparison of 'London' by William Blake and 'Composed Upon Westminster Bridge' By William Wordsworth. The two poems 'London' by William Blake and 'Composed upon Westminster Bridge' by William Wordsworth are about the City of London. William Blake lived in London all his life, except for the three years in which he moved to Sussex. He knew the ins and outs of the city, whilst William Wordsworth lived in Cumberland he was a visitor passing through on his way home. Blake has a very negative view toward London where as Wordsworth has a positive view toward the city. Blake's poem 'London' describes what he see's around London whilst Wordsworth wanted all of his poems to be a "spot in time" which is exactly what this poem is. William Blake was a lower-middle class son of a hosier, who also encouraged his artistic talents. Blake was an eccentric who based most of his poems on adult experiences through the eyes of a child, although this poem doesn't really use that viewpoint. William Wordsworth on the other hand was an upper class citizen who wrote in the style of romance and simplicity. Although both poems are about London the writers have very different viewpoints of the city. Wordsworth's poem is written in a peaceful and calming manor for example; 'Ne'er saw I, never felt, a calm so deep!' ...read more.

Blake blames the church and the palace for the creation of the 'manacles'. 'Every blackening church appals' This creates a few images in the reader's mind such as the pollution is blackening the church walls or it could be 'blackening' because it isn't helping to change the people or the king's morals. It is also quite hypocritical because the church is meant to lead someone along a righteous path, yet it is not practicing what it preaches. The church is seen as corrupted and a social gathering for rich people. In the final stanza, Blake uses alliteration on the letter 'b', the impact of this makes you say the word in a more forceful fashion and at a quicker pace compared to the walking pace it has been going throughout the poem. In Blake's poem he repeats the same words over again, such as 'chartered', he uses this because you can not move is from its designated place where it was built. For example the River Thames, was especially designated to the place it still stands at today because it's not supposed to move. Another repeated word is 'In', he uses this word because it gives the effect of something always being inside something else. The word 'every' is repeated because it's what he sees in all things he looks at. ...read more.

The word 'plagues' means disease and 'hearse' is a funeral car, all of these words promotes dark and miserable things with disastrous endings. Wordsworth wants to establish a happy, tranquil and touching mood in the poem "Composed upon Westminster Bridge". For example; 'All bright and glittering in the smokeless air.' The words 'bright' and 'glittering' are seen as happy, touching and beautiful, and the word 'smokeless' promotes a kind of tranquil atmosphere, Wordsworth's poem seems more unrealistic and a glorified view of the city. Whilst the atmosphere in Blake's poem is quite depressing and awful as he's talking about daunting yet very real situations. His poem sounds more realistic than fantasy. Blake creates his tone and mood by using linking ideas mentioned previously. Wordsworth creates his tone and mood by describing and linking the weather and time of day with the "country" scenery via houses and landmarks. Personally I prefer William Blake's poem "London" because it's a more realistic view of London especially as it was written during the Industrial Revolution which caused a vast amount of pollution. Even though this poem is quite sincere it is described beautifully for awful events and situations. My response to the society William Blake is quite disgusted, although its described very well. Although William Wordsworth's poem is described beautifully it seems very un-realistic and like it's a completely different world- not the world we know. I think his poem hasn't got a lot of character but has got touching scenery which almost makes up for the loss of character. ...read more.