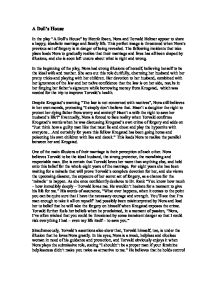 A Doll's House In the play "A Doll's House" by Henrik Ibsen, Nora and Torvald Helmer appear to share a happy, idealistic marriage and family life. This perfect image is threatened when Nora's previous act of forgery is in danger of being revealed. The following incidents that take place leads Nora to gradually realize that their marriage and lives has all been shaped by illusions, and she is soon left unsure about what is right and wrong. In the beginning of the play, Nora had strong illusions of herself, believing herself to be the ideal wife and mother. She acts out this role dutifully, charming her husband with her pretty tricks and playing with her children. Her devotion to her husband, combined with her ignorance of the law and her na�ve confidence that the law is on her side, results in her forging her father's signature while borrowing money from Krogstad, which was needed for the trip to improve Torvald's health. ...read more.

You'll see that I'm man enough to take it all on myself" had possibly been misinterpreted by Nora and lead her to belief that he will take the forgery on himself when Krogstad exposes the crime. Torvald further fuels her beliefs when he proclaimed, in a moment of passion, "Nora, I've often wished that you could be threatened by some imminent danger so that I could risk everything I had - even my life itself - to save you." Simultaneously, Torvald's assertions also show that, Torvald himself, too, is under the illusion that he loves Nora greatly. In his eyes, Nora is a weak, helpless and clueless woman in need of his guidance and protection, and Torvald obviously enjoys it when Nora plays the submissive role, stating "I shouldn't be a proper man if your feminine helplessness didn't make you twice as attractive to me." He believes that he holds control over the whole household, displaying his dominance by having the only key the letterbox, setting the rules in the house, and controlling the cash flow. ...read more.

Her final disillusion came when the 'miracle' did not happen and instead Torvald worries about his own reputation. Nora comes to the conclusion, claiming to Torvald, "You've never loved me, you've only found it pleasant to be in love with me." Torvald and Nora's lives have been shaped by various illusions. Nora had believed herself to be the ideal wife and mother, and abides by her own morals, trusting that the law will allow for good motives. These illusions were all shattered when she learns from Krogstad and Torvald that the law does not do so, that her forgery has made her a criminal, and that her deceit can corrupt and poison her children. In desperation Nora hangs on to the illusion of Torvald as the ideal husband who will protect her at any costs. Torvald's unexpected outburst and worry for his own reputation forces her to confront reality. After all these disillusions, Nora makes up her to leave him to pursue her own life of reality and the play ends with the slamming of the door. ...read more.