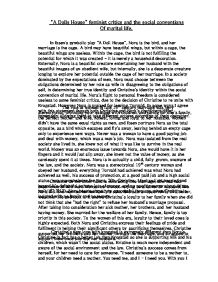 "A Dolls House" feminist critics and the social conventions Of marital life. In Ibsen's symbolic play "A Doll House", Nora is the bird, and her marriage is the cage. A bird may have beautiful wings, but within a cage, the beautiful wings are useless. Within the cage, the bird is not fulfilling the potential for which it was created - it is merely a household decoration. Externally, Nora is a beautiful creature entertaining her husband with the beautiful images of an obedient wife, but internally, she is a desperate creature longing to explore her potential outside the cage of her marriage. In a society dominated by the expectations of men, Nora must choose between the obligations determined by her role as wife in disagreeing to the obligations of self, in determining her true identity and Christine's identity within the social convention of marital life. Nora's flight to personal freedom is considered useless to some feminist critics, due to the decision of Christine to re unite with Krogstad. However Nora is praised for leaving Torvald. In some ways I agree with this statement though both Christine and Nora's characters differ immensely allowing them to take different actions according to their character. ...read more.

It shows Christina's loyalty to her family when she did not think that she "had the right" to refuse her husband's marriage proposal. After taking into consideration her sick mother, her brothers, and her husband having money. She married for the welfare of her family. Hence, family is top priority in this society. To the women of this era, loyalty to their loved ones is highly expected. Both Nora and Christina express their feelings of pride and fulfilment in helping their significant others by sacrificing themselves. Christine supported her brothers and her mother through the marriage, and struggled to support them once she lost her husband. Christine's new love with krogstad is extremely different than Nora's. Christine in fact has a better job than Krogstad so she is supporting him and his children, which wasn't the social status. Kristine is much more independent and aware of the social environment and the law. Christina's success comes from herself, for her need to care for someone. "I need someone to be a mother to, and your children need a mother. You need me, and I - I need you. With you I fear nothing." (270) Christine is an incredibly independent woman with ambitions in life. ...read more.

This remark explains that Nora is capable of choosing herself over her husband. Furthermore Nora has to be herself before she can be a wife or mother for that matter. A feminist's perception between the two women varies immensely. Feminists describe marriage as the man being the dominant figure, he takes care of the marriage and the support of the family, and the woman cleans the house and is merely a puppet to her husband. However Christina is the dominant person in the relationship with krogstad, she works and supports the family so feminists should really praise upon the re unitation between Christina and Krogstad as she is equal to the man in the marriage. As for Nora, her marriage is a feminist relationship. It is only her leaving at the end of the play which turns Nora into a strong, independent woman. Nora is discovering her true identity, so Christina embracing marriage at the same time as Nora leaving her husband doesn't really sabotage Nora's flight to personal freedom, as Christina is the dominant figure in the relationship, so freedom is gained and influenced in this society and era. ...read more.