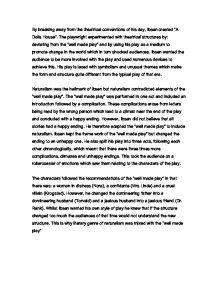 Form and Structure - A Dolls House

By breaking away from the theatrical conventions of his day, Ibsen created "A Dolls House". The playwright experimented with theatrical structures by: deviating from the "well made play" and by using his play as a medium to promote change in the world which in turn shocked audiences. Ibsen wanted the audience to be more involved with the play and used numerous devices to achieve this. His play is laced with symbolism and unusual themes which make the form and structure quite different from the typical play of that era. Naturalism was the hallmark of Ibsen but naturalism contradicted elements of the "well made play". The "well made play" was performed in one act and included an introduction followed by a complication. These complications arose from letters being read by the wrong person which lead to a climax near the end of the play and concluded with a happy ending. However, Ibsen did not believe that all stories had a happy ending. ...read more.

Whilst the changes to the way a typical play was staged may not have shocked the audiences too much, the content of "A Dolls House" certainly did. Ibsen wrote the play in 1879. This was a time where only certain subjects were appropriate for the stage and correctness was the base of a middle class Victorian life. Therefore when Ibsen included topics such as women disobeying their husbands and sexually transmitted diseases (STDs) audiences were horrified. Ibsen did not include such topics just to shock his audiences; he did it to promote change of such issues. In the 19th century sexually transmitted diseases were rampant. Ibsen believed that: "society has...obscure diseases which must be revealed before they can be cured". Ibsen can therefore be seen as a person who allowed society to progress. If he had not have talked about such issues it might be possible that STDs would still be a taboo issue today. ...read more.

Ibsen suggests that the role of women is much less important than the role of men. He suggests this when he shows how society expects women to sacrifice their integrity whilst men do not have to do the same. Nora has to be the reticent wife whilst Torvald is a domineering husband. It is not only Nora who must sacrifice her integrity. The nurse does this when she must leave her children to look after Nora. I believe that Ibsen is trying to show that all women are affected by the expectation for them to give up their integrity. As previously mentioned, the playwright might have done this under the belief that if such an issue was to be resolved it would first have to be acknowledged. Ibsen took a risk by trying to adjust the tried and tested form and structure of a play. However, the risk paid off and Ibsen has been applauded as one of the greatest writers of his era. Many writers today use his form and structure to help create their own plays but there is only one true "Dolls House". ...read more.