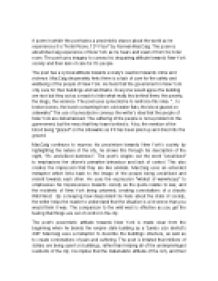 A poem in which the poet takes a pessimistic stance about the world as he experiences it is Hotel Room, 12th Floor by Norman MacCaig

﻿A poem in which the poet takes a pessimistic stance about the world as he experiences it is ?Hotel Room, 12th Floor? by Norman MacCaig. The poem is about MacCaig experience of New York as he hears and views it from his hotel room. The poet uses imagery to convey his despairing attitude towards New York society and their lack of care for it?s people. The poet has a cynical attitude towards society?s reaction towards crime and violence. MacCaig desperately feels there is a lack of care for the safety and wellbeing of the people of New York. He feels that the government in New York only care for their buildings and landmarks. Everyone would agree the building are nice but they act as a mask to hide what really lies behind them; the poverty, the drugs, the violence. The poet uses synecdoche to reinforce this idea. ??to broken bones, the harsh screaming from cold water flats, the blood glazed on sidewalks? The use of synecdoche conveys the writer?s idea that the people of New York are dehumanised. ...read more.

The comparison to the wild west is effective as you get the feeling that things are out of control in the city. The poet?s pessimistic attitude towards New York is made clear from the beginning when he brands the empire state building as a ?jumbo size dentist?s drill?. MacCaig uses a metaphor to describe the buildings structure, as well as to create connotations of pain and suffering. The poet is irritated that millions of dollars are being spent on buildings, rather than helping all of the underprivileged residents of the city. He implies that the materialistic attitude of the rich, and their lack of support for the poor, is the cause of a great divide and much tension in the city. He is also verbally attacking the great structures and buildings of New York, having a go at them for wasting money when it should be spent on helping out the people. This is another point that MacCaig makes which is very true as if the big wigs of New York society use these overly large buildings to hide the poor and suffering of New York behind. ...read more.

This also helps the reader to understand that the world is no more civilized than it used to be, reinforcing the despairing attitude that MacCaig created. To me the poet has a very good point as no matter what you do there will always be violence. Most famous figures that have spoken out about peace in the world and equality such as John Lennon, Dr. King, Ghandi, so on? have all ended up being assassinated. At the end of reading Norman MacCaig?s ?Hotel Room, 12th Floor? my understanding of New York society has changed as I can now view it from the poet?s stance. Although the poem is quite drab and down beat you can understand why he feel this way and he clearly points out why. The city?s violence and lack of care is something that has to be tackled and sorted out, though the poet feel that due to the nature of the people this is unlikely to happen. The poet very effectively conveys his pessimistic attitude through his use of imagery making this poem a very good piece of literature. ...read more.