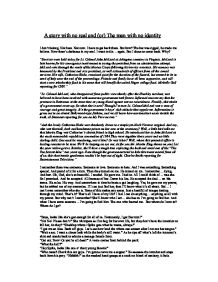 A story with no real end (or) The man with no identity I don't belong. Not here. Not now. I have to get back there. But how? The bet was rigged, he made me believe. Now there's darkness in my soul. I want to die... again. But I chose to come back. Why? "Services were held today for Lt. Colonel John McLeod at Arlington cemetery in Virginia. McLeod is best known for his courageous involvement in saving the president from an assassination attempt. McLeod rose through the ranks of the Marine Corps following his service overseas. His memory was honoured by the President and vice president, as well as hundreds of officers from all the armed services. His wife, Catharine Blake, remained quiet for the duration of the funeral, but seemed to be in need of help near the end of the proceedings. Friends and family have all been supportive, and will start a new scholarship fund in his name that will benefit the united n***o college fund. Michelle Gail reporting for CNN." "Lt. Colonel McLeod, who disappeared from public view shortly after the Hinckley incident, was believed to have been involved with numerous government task forces. Informed sources say that his presence in Botswana at the same time as young blood agents was no coincidence. Frankly, this stinks of a government cover-up. So what else is new? Though I'm sure Lt. Colonel McLeod was a man of courage and great integrity. It's the government's boys' club attitude that appals me. Information is given out in an almost Hollywood-type fashion, and we all know how moviemakers never stretch the truth. Al Simmons reporting for you on My View on two." "And the lovely Catharine Blake was absolutely divine in a simple jet-black Versace original. And say, who was that tall, dark and handsome prince on her arm at the ceremony? Well, a little bird tells me that Martin King was Catharine's closest friend in high school. ...read more.

Worse yet, I look like some Californian pretty boy. And of all of the hair colours, why blonde? That's it, keep joking. Then maybe your nerves will settle down. Or at least your hands will stop shaking. Even better, I'll stop talking to myself." I feel like some stupid school kid going out on his first date. Now there's a joke, we dated three years and were married five. Have to go slow. Feels like I've been gone only a few days, but five years have passed for her. Hope she'll remember. Hope I can count on her. Well, here goes everything. "Bzzzt." "Be right with you!" Comes a beautiful voice. "Grrr." A dog? It's familiar? It's my dog, I remember. "Good day! May I help you? My god she's even more beautiful. "Uh... hello... I'm from the... the..." "What's the matter? It looks like you've seen a ghost. Excuse my appearance. I was just trying this dress on to see if it fits. Big business party tonight. You know the kind. Lots of people. Lots of food. Minimal fun. But if I don't go, then the whole office gets uptight. So what do you think of it?" "You're gorgeo... I mean it's gorgeous." "Sniff, sniff, sniff." "Thanks. Anyway, you rang the bell. So what can I do for you?" All right now, you've already gone over this a dozen times. Hit her where she's got a soft spot. "Uh... I'm from the N.C.D.L., and we're going around the neighbourhood, checking to see if the dogs have been licensed. We're having a special this week where you can renew the license for twelve dollars or register for fifteen dollars so if this is you first..." "Mama! Mama!" What? "Why you go, Mama?" Tugging at the arm of her stolen mother. " Excuse me." She attends to her offspring. "Sweetie, mommy had to get the door. ...read more.

And this guy, big hairy deal. You call that an agent? Don't make me laugh. d**n you! This sucks the big one!" With the battle ending so quickly, the police are once again too late to intervene. That suits our character's needs. Until he sorts out the dizzying events surrounding his new life, being unknown and undetected will be his only source of comfort. A hat and a trench coat, removed from the back of a cars, serve to disguise him. He is now nothing more than a two-bit thief, he thinks wandering the late-night streets in search of peace, of some semblance of sanity. Power. To use or not to use; that is the question. If he can't decide maybe his fate will. "Rob, Look! It's that new superhero!" "Right on, man! Let's check him out!" "Cool! I didn't think he really existed!" "I saw him first!" McLeod looks over his shoulder to see two young boys sprinting towards him. "How? H-how did you know?" He turns away and closes his eyes. "Hey mister! Watch out!" "Uh?" Are they talking to me he thinks. "Aww cool, man! Look at him Kobe!" "It's that dragon dude from Chicago! I told you he was cool." He escapes the scene but fails to escape the nightmare. Is this my destiny? Is it meant to be that I live in paranoia of someone discovering my truth, my identity? Our hero is left to his own devices; it is now his task to dance with the devil. He is a superhero, but not a super hero born through good and fighting for good for he is born of the pit of h**l, born through evil but fighting for good. He has no choice. He has nothing. Many people spend many years of their lives trying to find their true identity, trying to find themselves. But for our hero he has no identity, nothing to search for but he has the many years. He has too many years. He will die slowly as he watches his reason for returning grow old, wither and die. ...read more.