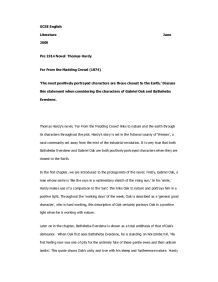 The most positively portrayed characters are those closest to the Earth, Discuss this statement when considering the characters of Gabriel Oak and Bathsheba Everdene.

GCSE English Literature June 2009 Pre 1914 Novel: Thomas Hardy Far From the Madding Crowd (1874) 'The most positively portrayed characters are those closest to the Earth,' Discuss this statement when considering the characters of Gabriel Oak and Bathsheba Everdene. Thomas Hardy's novel, 'Far From the Madding Crowd' links to nature and the earth through its characters throughout the plot. Hardy's story is set in the fictional county of 'Wessex', a rural community set away from the mist of the industrial revolution. It is very true that both Bathsheba Everdene and Gabriel Oak are both positively portrayed characters when they are closest to the Earth. In the first chapter, we are introduced to the protagonists of the novel. Firstly, Gabriel Oak, a man whose smile is 'like the rays in a rudimentary sketch of the rising sun.' In his 'smile,' Hardy makes use of a comparison to the 'sun'; this links Oak to nature and portrays him in a positive light. ...read more.

completely capable of running a farm, which is a contrast to the Bathsheba Everdene that we met at the beginning of the story. Hardy now portrays Bathsheba Everdene as a more modest person 'Bathsheba blushed slightly at the sense of being generous in public.' This shows how Bathsheba Everdene has changed, because before, the rare gestures of generosity that she made would have been behind closed doors, but now she's part of a farming community she feels more at ease. Hardy has changed her character into a farm mistress who is perfectly capable of running a farm. Hardy also describes her eyes as 'bright' this shows her as a happier person and as more gentle. There are scenes in the novel which involve the forces of nature, which bring Gabriel and Bathsheba together; developing their relationship and showing them in a positive light. In chapter 21 when Bathsheba's sheep fall ill after devouring a harvest of young clover, Bathsheba is distraught 'what can I do, what can I do! ...read more.

Chapter 56 shows the complete personality change that has occurred with the relationship between Gabriel Oak and Bathsheba Everdene, 'beside which the passion usually called by the name is evanescent as steam.' This suggests that the passions and the emotions that Bathsheba had felt towards Sgt Troy has evaporated like steam, what she has with Gabriel is more solid and feels more real for her, it is a relationship that will last the ages. Throughout the novel, the characters of Bathsheba Everdene and Gabriel Oak are put into many different situations and it shows that the ones where they are closest to nature make us see them in a more positive light. The final chapter of Hardy's novel brings together the two protagonists in matrimony, a natural ending which is welcomed by the rural neighbors and the community. Chapter 57 closes the story by creating an image in our minds of the happy couple 'Oak laughed and Bathsheba smiled.' We feel that the couple are now content with each others company and are at ease. ...read more.