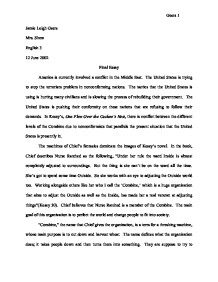 America is currently involved a conflict in the Middle East. The United States is trying to stop the terrorism problem in nonconforming nations.

Jamie Leigh Geers Mrs. Shew English 3 12 June 2002 Final Essay America is currently involved a conflict in the Middle East. The United States is trying to stop the terrorism problem in nonconforming nations. The tactics that the United States is using is hurting many civilians and is slowing the process of rebuilding their government. The United States is pushing their conformity on these nations that are refusing to follow their demands. In Kesey's, One Flew Over the Cuckoo's Nest, there is conflict between the different levels of the Combine due to nonconformists that parallels the present situation that the United States is presently in. The machines of Chief's fantasies dominate the images of Kesey's novel. In the book, Chief describes Nurse Ratched as the following, "Under her rule the ward Inside is almost completely adjusted to surroundings. But the thing is she can't be on the ward all the time. She's got to spend some time Outside. So she works with an eye to adjusting the Outside world too. Working alongside others like her who I call the 'Combine,' which is a huge organization that aims to adjust the Outside as well as the Inside, has made her a real veteran at adjusting things"(Kesey 30). ...read more.

This is made visible through Ellis. He was considered an Acute when he entered the hospital, until they mistakenly gave him to much Shock Therapy. The result is that now you can see him now standing permanently "crucified" on the wall, an unfortunate consequence of the 'therapy.' They also employ another method of attempting to improve a person, which is a lobotomy. This is a procedure where they remove a small part of your brain; Ruckly was the victim of this manipulation. The lobotomy caused him to turn into a Chronic. "The staff, now, they consider Ruckly one of their failures" (Kesey 20). The Combine is actually hurting the patients to the point that they are unable to recover from their illness that is keeping them in the ward. There is also another way that the staff manipulates the patients. Nurse Ratched leaves a logbook out for the patients to leave comments in about the other patients. The person who writes in the logbook, is then rewarded by being allowed to sleep in the next morning. ...read more.

This was parallels the situation between Nurse Ratched and McMurphy. Due to his diverse ways, she eliminated the threat created by McMurphy by sending him to get a lobotomy. Conformity for McMurphy is achieved only after Nurse Ratched forced it upon him, after she was humiliated in front of the ward. Once McMurphy is back in the ward, Chief attempted to talk to him, to then realize that he has turned into a vegetable. Chief is all upset over this that he smothers him to rid his life of misery. With the help of Scanlon, another patient, he helps plan Chief's escape from the ward. Chief is now the only person to have triumphed over the Combine. In Kesey's, One Flew Over the Cuckoo's Nest, there is conflict between the different levels of the Combine due to nonconformists. McMurphy, the nonconformist, challenged Nurse Ratched's ways throughout the book. Nurse Ratched, the conformist, is always fighting for absolute power of the ward. Due to her manipulative actions and corruption, the Combine is weakened, which leaves it vulnerable. This is how Chief is finally able to succeed. Due to this kind of manipulation, the Combine is destine for failure. Geers 1 ...read more.