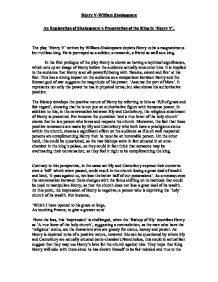 An Exploration of Shakespeare(TM)s Presentation of the King in Henry V(TM).

An Exploration of Shakespeare's Presentation of the King in 'Henry V'. The play 'Henry V' written by William Shakespeare depicts Henry to be a magnanimous but ruthless king. He is portrayed as a soldier, a romantic, a friend as well as a king. In the first prologue of the play Henry is shown as having a mythical significance, which sets up an image of Henry before the audience actually encounter him. It is implied to the audience that Henry is an all-powerful being with 'famine, sword and fire' at his feet. This has a strong impact on the audience as a comparison between Henry and the Roman god of war suggests the magnitude of his power. 'Assume the port of Mars'. It represents not only the power he has in physical terms, but also shows his authoritative position. The Bishop develops the positive nature of Henry by referring to him as 'full of grace and fair regard', showing that he is not just an authoritative figure with immense power. In addition to this, in the conversation between Ely and Canterbury, the religious attachment of Henry is presented. For instance the quotation 'and a true lover of the holy church' shows that he is a person who loves and respects the church. ...read more.

Henry has used the insult of the tennis b***s but turned it around onto the Dauphin, showing his intelligent and witty side 'Shall stand sore charged for the wasteful vengeance.' Henry, has adopted a more serious note and is angry, but seems to be handling the insult made by the Dauphin rather lightly, showing that he is not hasty as illustrated in the earlier scenes, but that he is calm and patient. However, the contrast between the Dauphin and Henry portrays Henry to be more mature and responsible than the Dauphin. The speech before the gates of Harfleur, displays Henry's skills as a spokesman as he manages to persuade the governor to let him and his men in. Henry does this by making various threats. For example 'With conscience wide as h**l, mowing like grass Your fresh, fair virgins and your flowering infants.' Shakespeare uses both alliteration and metaphorical language in Henry's speech to create trepidation in the governor. The use of the alliteration allows significance to be placed on specific words; here Shakespeare uses harsh contrast to inform the governor of what could happen to France's 'fresh, fair virgins', these being the women of France. He then further warns 'If your pure maidens fall into the hand, Of hot and forcing violation?' ...read more.

Once more, he is a King who does not just say things and sit back and watch others do it for him, such as war, where he joined in and took an active role, unlike the French king who is the opposite of Henry. The use of humour is also seen in this scene, when Henry asks Katherine 'Can any of your neighbours tell, Kate? I'll ask them'. This would be humorous as Katherine is not giving Henry a direct answer and Henry therefore begins to become anxious as to how she feels towards him. Again humour is used when Katherine's father walks in whilst Henry and Katherine are kissing, and Henry says 'Here comes your father'. By moving away from Katherine, when her father walks in, also shows that Henry has respect for the French King. Overall, Shakespeare has presented Henry in various different situations, showing him as a powerful leader and a great orator. The audience are left intrigued by him, as he shows great determination throughout the play, this can be seen in the speech before the gates of Harfleur and the active role he takes when fighting in battle. The different facets of Henry not only bring about confusion as he is such a complex character but also mystery. The respect that many held for him was just one of the many great qualities that made the fictional Henry such a great King. Word count 2,282 ?? ?? ?? ?? Henry V-William Shakespeare ...read more.