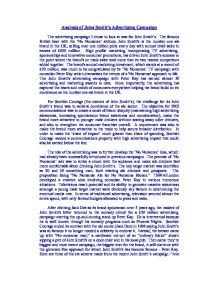 Analysis of John Smith's Advertising Campaign The advertising campaign I chose to look at was for John Smith's. The famous British beer with the 'No Nonsense' attitude, John Smith's is the number one ale brand in the UK, selling over one million pints every day with annual retail sales in excess of �650 million. High profile marketing, incorporating TV advertising, sponsorships and innovative consumer promotions, has driven John Smith's success to the point where the brand's on trade sales total more than its two nearest competitors added together. The brand's annual marketing investment, which stands at a record of �20 million, was much to be congratulated by its 'No Nonsense' TV campaign with comedian Peter Kay which dramatises the virtues of a 'No Nonsense' approach to life. The John Smith's advertising campaign with Peter Kay has earned almost 50 advertising and marketing awards to date. More importantly, the advertising has captured the hearts and minds of consumers everywhere helping the brand build on its dominance as the number one ale brand in the UK. For Scottish Courage (the owners of John Smith's), the challenge for its John Smith's brand was to achieve dominance of the ale sector. ...read more.

He then ironically says "sweet dreams" to his daughter than asks for two more beers from the bar without even realising what he has said to his daughter, showing his laid back approach to life. He takes a sip of his pint, then realises that they are all starring at him and says "what?" Also showing he was being serious about the way he replied to his daughter but comedian towards the audience at the same time. The final image is of a pint of John Smith's and as before its slogan "No Nonsense," summing up the whole point of the advert. This advert probably appeals to both male and female audiences as it is concentrating on the non-seriousness of Peter Kay's ideas towards parenthood. The final John Smith's advert I looked at from its most recent campaign is entitled "Top Bombing." The advert starts in the scene of some sort of diving event e.g. Olympics. Everything comes across to be authentic as we see real diving platforms and pools, a commentator expressing his feelings on the dives, a voice in the background telling the type of dive and judges score, action replays of the dives, and also diagetic sounds e.g. ...read more.

This has built over the course of the campaign to date. Endorsement of the statement "John Smith's is a humorous and down to earth brand" is just one example. Attribution of image statements like 'is a brand for people like me' have increased amongst all age groups. The Peter Kay campaign created massive awareness. It successfully communicated the brand's "no nonsense" positioning in a way that people could really engage with. As a result people feel closer to the brand, which ultimately has had a positive impact on sales. The John Smiths campaign with Peter Kay has achieved massively considering it is only a piece of advertising for a type of ale. The TV commercials have been talked about in offices and pubs across the country, and sayings such as "Ave it" have entered everyday conversation and discussion. The latest "No Nonsense" campaign has carried on a strong tradition of memorable and highly successful John Smiths TV advertising. The advertising has resulted in increased awareness and sales. It also won a number of awards including the Creative Circle and Campaign magazine's Campaign of the Year 2002. The judges described the advertising as "a brilliant campaign that has entered people's everyday lives while significantly boosting sales and winning fans, plaudits and column inches galore in the process." ...read more.