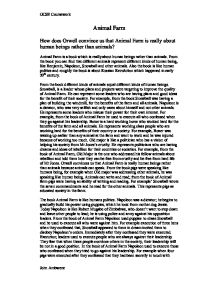 Animal Farm How does Orwell convince us that Animal Farm is really about human beings rather than animals? Animal Farm is a book which is really about human beings rather than animals. From the book you can find that different animals represent different kinds of human being, like Benjamin, Napoleon, Snowball and other animals. Also the book is like human politics and roughly the book is about Russian Revolution which happened in early 20th century. From the book different kinds of animals equal different kinds of human beings. Snowball, is a leader whose plans and projects were targeting to improve the quality of Animal Farm. He can represent some leaders who are having plans and good ideas for the benefit of their society. For example, from the book Snowball was having a plan of building the windmill, for the benefits of the farm and all animals. Napoleon is a dictator, who was very selfish and only cares about himself and not other animals. ...read more.

From the book pigs were speaking like humans being, for example when Old major was addressing other animals, he was speaking like human being. Animals can write and read; from the book of Animal farm pigs were having an ability of writing and reading. For example' Snowball wrote the seven commandments and he read for the other animals. This represents pigs as educated society in the farm. The book Animal Farm is like humans politics. Napoleon was a dictator; he begins to gradually build his power using puppies, which he took from mother dog Jessie. Today Napoleon is like Robert Mugabe of Zimbabwe, who doesn't want to step down and leave other people to lead; he is using police and army against his opposition leaders. From the book of Animal Farm Napoleon used puppies to chase Snowball and he used to execute all who were against him. For example execution of three hens when they confessed that, Snowball appeared to them in dream incited them to disobey Napoleon's orders. ...read more.

Old Major represents Karl Marx, who inspired middle class people in Russia to fight for their rebellion. Napoleon is like Joseph Stalin, who was a dictator, he used media for his propaganda and he chased Leon Trotsky from Russia during his leadership. Snowball is representing Leon Trotsky, who was a leader after revolution. He was working for the benefit of Russia and all Russian people. He was later chased by Joseph Stalin and went to exile. For example, from the book of Animal Farm Snowball was chased by Napoleon and he went to leave in another farm. The Russian Revolution was caused by middle class people who were humiliated by their leaders, who were thinking about their own goods and not their people. In conclusion the different animals equal different kinds of human beings because the characters of animals are the same as in human being. Orwell used an old literary technique, like fairy tales, where animals behave like human beings to criticise the communist system at the end of the Second World War. ?? ?? ?? ?? GCSE Coursework John Ambwene ...read more.