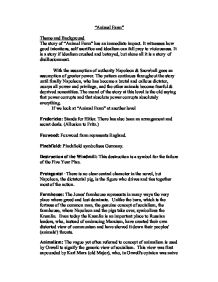 "Animal Farm" Theme and Background The story of "Animal Farm" has an immediate impact. It witnesses how good intentions, self sacrifice and idealism can fall prey to viciousness. It is a story if idealism crushed and betrayed, but alone all it is a story of disillusionment. With the assumption of authority Napoleon & Snowball goes an assumption of greater power. The pattern continues throughout the story until finally Napoleon, who has become a brutal and callous dictator, usurps all power and privilege, and the other animals become fearful & deprived nonentities. The moral of the story at this level is the old saying that power corrupts and that absolute power corrupts absolutely everything. If we look at "Animal Farm" at another level Fredericks: Stands for Hitler. There has also been an arrangement and secret deals. (Allusion to Fritz.) Foxwood: Foxwood farm represents England. Pinchfield: Pinchfield symbolises Germany. Destruction of the Windmill: This destruction is a symbol for the failure of the Five Year Plan. Protagonist � There is no clear central character in the novel, but Napoleon, the dictatorial pig, is the figure who drives and ties together most of the action. Farmhouse: The Jones' farmhouse represents in many ways the very place where greed and l**t dominate. Unlike the barn, which is the fortress of the common man, the genuine concept of socialism, the farmhouse, where Napoleon and the pigs take over, symbolizes the Kremlin. Even today the Kremlin is an important place to Russian leaders, who, instead of embracing Marxism, have created their own distorted view of communism and have shoved it down their peoples' (animals') throats. Animalism: The vague yet often referred to concept of animalism is used by Orwell to signify the generic view of socialism. This view was first expounded by Karl Marx (old Major), who, in Orwell's opinion was naive in thinking that his philosophy would actually work. ...read more.

The first two and last two commandments are aimed at reinforcing the unity of the animal world and establishing some basic beliefs for the animals to share. Commandments 3-5, which explicitly forbid the animals to engage in human activities such as sleeping in beds, wearing clothes, or drinking alcohol, are fundamentally different. With these Commandments, the animal society attaches a significance and prestige to these vestiges of human life that they might have not developed otherwise. With no taboos against wearing the Jones's clothes, for example, one can imagine a scenario where the animals wear the clothes briefly as a curiosity, with no harm done. By forbidding these acts, the Revolutionary leaders turn the items into signifiers of prestige and social standing, making the pigs' eventual adoption of human habits particularly disillusioning. Analysis of Chapter 3 Chapter Three: Analysis In Chapter Three we begin to see the first unmistakable signs that the Revolution will drift away from the common animals' ideals, which were more aligned with Old Major's vision of a classless society. The exclusion of the pigs from the farm labour marks the beginnings of the social stratification which would have been anathema to Old Major. The animals go along with these developments out of fear that without the pigs, Mr. Jones will return, though these fears are implanted by Squealer, who early on recognizes the value of fear in persuading the animals. Chapter Three also establishes the division between Snowball and Napoleon. Snowball is clearly the "thinker" of the movement, developing the flag-raising ritual and symbolism and creating the elaborate system of committees. To the reader, much of Snowball's activity seems benign, and even benevolent, as in the education efforts and improvement-minded groups like the Whiter Wool Movement for the sheep. These efforts establish Snowball as the symbolic descendant of Old Major's vision of animal life. Napoleon, in contrast, becomes subtly malevolent in his interactions with the newborn puppies. ...read more.

This aside plays up the uses of language to enforce and distort public perception. Moments like Boxer's removal to the horse butcher are when Animal Farm's ironic point of view become most crucial. The animals slowly grasp that Boxer is being sold for glue, but Squealer is easily able to pacify them with a sloppy lie. The reader, however, is not so easily tricked, and this discrepancy between what the animals and the narrating voice believe to be true and what the reader knows creates a bitter sense of irony. Analysis of Chapter 10 Chapter Ten: Analysis The aging of the animals with the passage of time removes much of the grumblings and covert dissent that the regime faced early on in its existence. This transformation returns to the earlier theme of the reliability of memory. With all cultural traditions from the Revolution (such as the song "Beasts of England") now eliminated, and the older citizens slowly dying out, the Animal Farm society is becoming increasingly harsh, bleak, and ignorant of the great claims the revolutionaries once made. The rise of the bureaucracy offers a commentary on the nature of totalitarian governments which favour one class over the common citizens. Faced with a pig population growing much more rapidly than the rest of the animals, Squealer is forced to invent semi-secret and unnecessary "work" for them to perform. He explains to the other animals about the pigs' outputs, which "were large sheets of paper that had to be covered closely with writing, and as soon as they were so covered, they had to be burnt in the furnace." The final, climactic scene, where the animals finally see the parallels between the pigs and the humans, is both chilling and poignant. The animals are honestly not as smart as the pigs, so it is with earnest and gullible faith that they have withstood the destruction of their revolutionary ideals and the advent of the totalitarian regime. The moment where they vividly recognize the pigs for the human-minded, and therefore hopelessly corrupted, rulers that they are is a moment of disillusionment, and ultimately horror. ...read more.