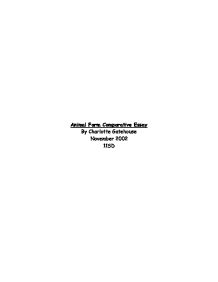 Animal Farm Comparative Essay By Charlotte Gatehouse November 2002 11SD GCSE English / GCSE English Literature Post-1914 prose text Animal Farm by George Orwell Teacher: S Webber Comparison of Orwell's Original Novel with the animated film version directed by John Halas and Joy Batchelor (remastered 1993). In many ways the animated film version of Animals farm has stayed faithful to the original Novel by Orwell, although there are several significant changes from the original made by the film-makers. In the novel very little descriptive detail is given to the reader about the farm at the beginning of the novel; instead Orwell describes Mr Jones and his behaviour. Evidence of this is on page 1, chapter 1, where Orwell writes, "Mr. Jones, of the Manor Farm, had locked the hen-houses for the night, but was too drunk to remember to shut the pop-holes." Also Orwell writes on page 1 chapter 1 "... kicking off his boots at the back door, drew himself a last glass of beer from the barrel in the scullery, and made his way up to bed, where Mrs. Jones was already snoring." These descriptions tell the readers that both Mr and Mrs Jones are very neglectful towards the farm, as Mr Jones does not lock up the chickens properly leaving them in danger of being killed by foxes. And Mrs Jones does not even make any attempt to close the farm down for the night. This shows that they do not care what happens to the animals. Also, Mr Jones is an alcoholic, and is very drunk, so he is as neglectful to himself as he is towards the animals, by drinking himself to an early grave. The reason why Orwell has chosen not to describe the farm itself in any detail at this point is because the readers are able to infer an image of the farm being dilapidated and decayed around the neglect it is suffering form the owners, Mr and Mrs Jones. ...read more.

When they are chasing Snowball over the snowy ground the dogs look like intensely black silhouettes. Also occasionally the dogs are shown with their tongue hanging out, which tells the audience of the dogs' appetite and reminds the audience of their savage eating and their predatory instincts making them threatening just to look at. An example of this is when they have killed Snowball; they are seen with blood red tongues and salivary jaws, which in itself provoke an image in the audience's minds of the savage ripping and tearing of Snowballs throat. The film makers also make it apparent that the dogs are Napoleons private army by they all looking the same, as if they wear a black uniform; black being symbolic of evil, which mirrors Napoleons character. Also the way the dogs move in packs and formations of two, enforces the audience's sense of them being predators and also more like machines as they serve a purpose with no emotion. In the novel Orwell describes the hens as rebelling against the order from Napoleon of giving their eggs to Mr Whimper for money. In chapter seven it reads, they "...must surrender their eggs...When the hens heard this, they raised a terrible outcry...they protested that to take the eggs away now was murder. For the first time since the expulsion of Jones there was something resembling a rebellion. Led by three young Black Minorca Pullets, the hens made a determined effort to thwart Napoleon's wishes." This tells the reader how brave and how sick they are of being under Napoleons rule and that he had gone too far this time. They carry on the fight which they are doomed to lose with valiant attacks that have no effect. It reads, "Their method was to fly up to the rafters and there lay their eggs, which smashed to pieces on the floor." This is a great tactic as it gets right under Napoleons skin because he will lose money and face, but the repercussions are his wrath. ...read more.

In chapter ten it reads, "The creatures outside looked from pig to man, and from man to pig, and from pig to man again; but already it was impossible to say which was which." This tells the readers that the pigs have become their enemies, the enemy that persecuted and slaughtered them for lifetimes. This gives the reader a strong message of with power comes corruption regardless of who it is, weather it is a Jones, or a Napoleon, power corrupts. The overall message of the novel is society has to be on its guard from such characters like Jones and Napoleon to prevent them from becoming too powerful and abusing their position. There is no point in having good intentions, society has to be on its guard and can not afford to be na�ve, because there will always be a Napoleon and a Jones ready to take advantage. Society has to identify and has to deal with individuals like Jones and Napoleon. The animals in the novel have made the classical mistake of trusting too much. They take too much in good faith until it is too late for change. The fact that the animals lost out in this story means that somebody else can profit from their experience and use it to their advantage. The film has a far more optimistic ending than Orwell's novel as it still manages to give the warning and message of the novel but has a happy ending. With the film, it goes that one step further by saying that it is possible to stop the tyrant, but society has to be brave; see what has to be done and do what ever it is. The rampage of the farm house by the other animals is carried out symbolically. The main symbol is the destruction of Napoleons picture; it is a repeated symbol from the very first revolution, as a picture of Jones was smashed. The destruction of the dictator's pictures is symbolic of assassination, showing clearly that sometimes society has got to bite the bullet and get rid of these people. ...read more.