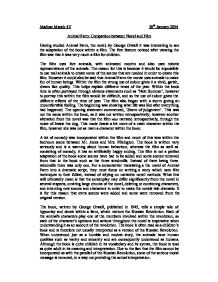 Madhav Manek 4V 28th January 2004 Animal Farm: Comparison between Novel and Film Having studied Animal Farm, the novel, by George Orwell it was interesting to see the adaptation of the book within a film. The first feature noticed after viewing the film was that it was very much a film for children. The film uses live animals, with animated mouths and also uses robotic representations of the animals. The reason for this is because it would be impossible to use real animals to create some of the scenes that are needed in order to create this film. However it could also be said that Animal Farm the movie uses animals to make fun of human beings. Within the film the strong use of colour gives it a vivid, garish, dream like quality. This helps explain different times of the year. Within the book time is often portrayed through obvious statements such as 'Next Summer', however to portray this within the film would be difficult, and so the use of colour gives the different effects of the time of year. ...read more.

For a screenwriter translating a the novel of Animal Farm into a dramatic script, they must focus on writing a story which uses film techniques to their fullest, instead of relying on narrative novel methods. What this will ultimately mean is that the screenplay may differ significantly from the novel in several respects, omitting large chunks of the novel, deleting or combining characters, and inventing new scenes and characters in order to make the novels tale dramatic. It is for this reason that extra scenes were added and some were removed from the original version. The book, written by George Orwell, published in 1945, tells a simple tale of hypocrisy and deceit within a farm, which mirrors the Russian Revolution. Each of the animal's characters play one of the members involved within the revolution, so each of the character's opinions and actions throughout the novel is imperative when understanding it as an account of the revolution. The book is often read as a children's book and is therefore not usually interpreted as a version of the Russian Revolution. ...read more.

It became more horrific and cold, then suddenly when the scene changes again the music became orchestral. There was slight irony within the beginning of the film. This was that when the Pilkingtons from next door were driving proudly into the Jones' driveway, the children were playing around with the pigs. At this particular point their mother, Mrs Pilkington ordered her children not to play with the pigs as one day the pigs will come and play with you. Another aspect within this film is that each of the characters are more emphasised than their written counterparts. For example, Mr Jones is emphasised as a neglectful, ignorant drunk and is meant to be hated by both the animals on the screen and the audience alike. In the book, Mr Jones is portrayed as this also, but there isn't as much emphasis on his character, so the audience picture him for themselves. Due to these reasons the film is am adaptation of the book rather than a representation of the novel. In my opinion neither, the book nor the film is better, they are both different methods of getting the plot across to the audience. ...read more.