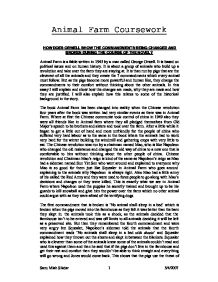 Animal Farm - How does Orwell show the commandments being changed and broken during the course of the novel?

Animal Farm Coursework HOW DOES ORWELL SHOW THE COMMANDMENTS BEING CHANGED AND BROKEN DURING THE COURSE OF THE NOVEL? Animal Farm is a fable written in 1945 by a man called George Orwell. It is based on political issues and on human history. It is about a group of animals who build up a revolution and take over the farm they are staying at. It is than run by pigs that are the cleverest of all the animals and they create the 7 commandments which every animal must follow. But as the pigs become more powerful and human like, they change the commandments to their comfort without thinking about the other animals. In this essay I will explain and show how the changes are made, why they are made and how they are justified. I will also explain how this relates to some of the historical background in the story. The book Animal Farm has been changed into reality when the Chinese revolution four years after the book was written had very similar events as there was in Animal Farm. Where at first the Chinese communist took control of china in 1949 also they were all friends like in Animal farm where they all pledged themselves from Old Major's speech to be brothers and sisters and took over the farm. ...read more.

don't live in the farmhouse and get their rest and comfort then they wouldn't be able to think straight and everything will go wrong and Jones would come back. This shows that the pigs use the threat of Jones would come back if the pigs are not fully comfortable and also the pigs know that the animals are afraid of Jones and that they don't want to see him back forever. The second commandment that the pigs broke and changed to their comfort is 'No animal shall kill another animal' and this was changed because Napoleon suspected that there were traitors amongst the animals who would secretly meet with Snowball at night and give Snowball all of Animal Farm weaknesses. The pigs made this change to the commandment to their own reputation and show the animals that you should never cross side from Napoleon. The change to the commandment is justified to the animals when they read the commandment again but this time it read 'No animal shall kill another animal without cause'. The animals were confused and dumb stroked as they forgot about the last two words but then later believed that the commandment wasn't violated and that the traitors got what they deserved and this is shown in the book where it quotes 'Somehow or other, the last two words has slipped out of the animals' memory. ...read more.

trotter and this shows that the pigs are becoming more human like and change the line "Four legs good, two legs bad' to 'Four legs good, two legs better'. This also shows that the pigs are changing all the hate for two legs that they made in the beginning of the revolution to actually reversing it making it sound that two legged person or animal is better than four legged. Also after this they changed the commandment 'All animals are equal' to 'All animals are equal but some are more equal than others'. This shows that the pigs are now trying to say that they are more superior than the other animals on the farm. To conclude, as the pigs gained and retained power, they slowly let the power get the best of them which led to the changes to the commandments and the changes to the animals lives and this is where the pigs abused their power and I quote Lord Acton's words "Power corrupts, Absolute power corrupts absolutely". Also Evolution was a big part of this as at first it was ape to man but as the pigs used and abused their powers they were slowly forming themselves into humans where I finish with the quote "the creatures looked from pig to man, and from man to pig, and from pig to man again; but already it was impossible to say which was which". Sanu Miah Sikdar 1 5/4/2007 ...read more.