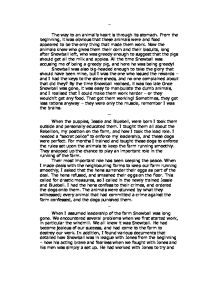 Grab their bellies and their bodies follow The way to an animal's heart is through its stomach. From the beginning, it was obvious that these animals were and food appeared to be the only thing that made them work. Now the animals know who gives them their corn and their biscuits, long after Snowball left, who was greedy enough to suggest that the pigs should get all the milk and apples. All the time Snowball was accusing me of being a greedy pig, and here he was being greedy! Snowball was also big-headed enough to take the glory that should have been mine, but I was the one who issued the rewards - and I had the keys to the store sheds, and no one complained about that did they? By the time Snowball realised, it was too late Once Snowball was gone, it was easy to manipulate the dumb animals, and I realised that I could make them work harder - or they wouldn't get any food. That got them working! Sometimes, they got less rations anyway - they were only the muscle, remember I was the brains. ...read more.

Over time, the animals forgot Snowball, but I will always remember him, and how he tried to take control, acting brave and fearless whilst being in league with Jones all the time. Now it is common to blame Snowball whenever anything goes wrong on the farm. The animals foolishly thought that Snowball was the one who deserved glory and leadership, and awarded Snowball "Animal Hero, First Class" - rubbish! Snowball could never be a hero, and the animals soon realised that. Make them work - or worsen their living conditions The animals knew that after the Rebellion, there was a lot of work to be done. We had to do more work to make the farm run smoothly, and be more productive than we had been under Jones' reign! The windmill was a big priority, but we had to get the harvest done, and these animals weren't too happy about all the work. What made it worse was that these animals were now living a life of luxury now that Jones had gone. They had endless supplies of food and they had the farm to themselves. ...read more.

It makes me feel good when the animals appreciate me. Propaganda is the key - rewrite history When I took leadership of the farm, I needed to ensure the animals knew who I was and what role I took in the Rebellion. All the animals thought it was Snowball who performed the best in the battle against Jones and his men, but it was I, Napoleon who took charge and lead the animals towards victory. By placing the blame on Snowball for all the bad things that happened, the animals could see who it was who really performed - not that idiot Snowball who thought he could impress the animals by acting so brave. The maxim that the animals lived by, "Napoleon is always right" as I explained earlier, together with Squealer's lists of figures that proved that we had worked better than under Jones' ownership, encouraged the animals to work harder all the time. I dread to think what will happen to the animals when my time is up and I leave this farm, but I know that they will remember me and they will work harder. NAPOLEON IS ALWAYS RIGHT ...read more.

A very good attempt at getting into the mind of Napoleon.
Conversational style using exclamation points and rhetorical question makes the character's voice seem authentic.
Effective use of graphology.
Good inclusion of a couple of quotes references the novel well.
Shows understanding and knowledge of novel and an imaginative take on the character.
Some repetition of words and phrases.
Sophisticated vocabulary and varied syntax used throughout.
**** 4 stars