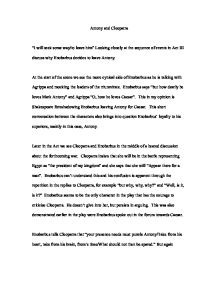 Antony and Cleopatra "I will seek some way/to leave him" Looking closely at the sequence of events in Act III discuss why Enobarbus decides to leave Antony. At the start of the scene we see the more cynical side of Enobarbus as he is talking with Agrippa and mocking the leaders of the triumvirate. Enobarbus says "but how dearly he loves Mark Antony" and Agrippa "O, how he loves Caesar". This in my opinion is Shakespeare foreshadowing Enobarbus leaving Antony for Caesar. This short conversation between the characters also brings into question Enobarbus' loyalty to his superiors, mainly in this case, Antony. Later in the Act we see Cleopatra and Enobarbus in the middle of a heated discussion about the forthcoming war. Cleopatra insists that she will be in the battle representing Egypt as "the president of my kingdom" and she says that she will "Appear there for a man". Enobarbus can't understand this and his confusion is apparent through the repetition in the replies to Cleopatra, for example "but why, why, why?" ...read more.

Here Enobarbus clearly states that he will follow Antony, but reason and logic are going against him if he does. Enobarbus' mind tells him that he should go to Caesar but his heart tells him to stay with Antony. In scene thirteen we see a reversal of roles from scene seven. Cleopatra asks Enobarbus for his advice, but Enobarbus' advice is cynical and blunt, "Think, and die." And when Cleopatra asks whose fault it was, Enobarbus says that it was "Antony only...why should he follow? /the itch of affection should not then/have nicked his captainship". Here Enobarbus blames Antony for the loss and not Cleopatra, he thinks Antony should have been more professional and carried on with the battle rather than chase after affection. This is the start of Enobarbus' defection to Caesar as he starts to criticise Antony more and more. Since some of his lines are aside this gives the audience a clear view into what he is really thinking. Enobarbus says that Caesar would have had better judgement than Antony, and even with great armies under his control would not go back on his good fortune by fighting a practised swordsman. ...read more.

Meaning that when heroism begins to hunt logic, it destroys its main weapon. The speech ends with a blunt line which tells the audience exactly what Enobarbus is thinking. "I will seek some way to leave him". This in turn creates sympathy for the character of Antony, because we know that Enobarbus is planning to leave him, but he doesn't, this also gives us dramatic irony over him, which makes us pity Antony. In my opinion Enobarbus wants to stay loyal to Antony in his heart but he is continuously faced with obstacles which drive him away from Antony. Mainly Antony's apparent lack of logic which Enobarbus sees could put him in danger. His advice is repeatedly ignored in the presence of Cleopatra and the frustration has built up to cause him to betray Antony. In my opinion Enobarbus' betrayal would have had more impact in Shakespeare's time because many authors write to cater the interests of their audience and in the Jacobean era loyalty and treason were very important and the King himself at the time was obsessed with the idea of treason because of his run in with the gunpowder plot. Gary Longshawe ...read more.