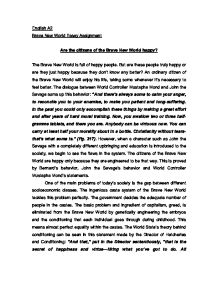 Are the citizens of the Brave New World happy?

English A2 Brave New World Essay Assignment Are the citizens of the Brave New World happy? The Brave New World is full of happy people. But are these people truly happy or are they just happy because they don't know any better? An ordinary citizen of the Brave New World will enjoy his life, taking soma whenever it's necessary to feel better. The dialogue between World Controller Mustapha Mond and John the Savage sums up this behavior: "And there's always soma to calm your anger, to reconcile you to your enemies, to make you patient and long-suffering. In the past you could only accomplish these things by making a great effort and after years of hard moral training. Now, you swallow two or three half-gramme tablets, and there you are. Anybody can be virtuous now. You can carry at least half your morality about in a bottle. Christianity without tears-that's what soma is." (Pg. 217). However, when a character such as John the Savage with a completely different upbringing and education is introduced to the society, we begin to see the flaws in the system. The citizens of the Brave New World are happy only because they are engineered to be that way. ...read more.

... "Yes, I thought it was wonderful," he lied and looked away; the sight of her transfigured face was at once an accusation and an ironical reminder of his own separateness." (Pg. 76) Bernard knows that true happiness is the result of freedom, not slavery, and he sees this freedom in John the Savage who was brought up in the Reservation. When Bernard is sent to Iceland, John, who has been brought to the Brave New World from the Reservation, continues the struggle against slavery that Bernard started. John is introduced to the Brave New World by Bernard. He was an outsider in the Reservation in which he had previously lived in because of his mother. He is also rejected by the World State because of his different beliefs. John's growing revulsion against everything in the World State finally propels him into a direct confrontation with it. After his mother's death in a hospital, he attacks a group of Bokanovsky children waiting for their daily soma ration, "'But do you like being slaves?' the Savage was saying as they entered the Hospital. His face was flushed, his eyes bright with ardour and indignation. 'Do you like being babies? Yes, babies. Mewling and puking,' he added, exasperated by their bestial stupidity into throwing insults at those he had come to save. ...read more.

You can't make flivvers without steel-and you can't make tragedies without social instability. The world's stable now. People are happy; they get what they want, and they never want what they can't get"..."And if anything should go wrong, there's soma. Which you go and chuck out of the window in the name of liberty, Mr. Savage. Liberty!" "Expecting Deltas to know what liberty is! And now expecting them to understand Othello! My good boy!"... "But that's the price we have to pay for stability. You've got to choose between happiness and what people used to call high art." (Pg. 201). Mond admits that the citizens of the Brave New World are happy because they are engineered to be that way. All of these examples demonstrate that the people in the Brave New World are conditioned to accept their social destiny and made to feel good about it. An individual who differs from the stereotype will immediately feel like an outsider in the society, with the exception of Mustapha Mond. Mond is a different case though, because he is the one making the decisions so he has to be above the others' level of intelligence. However, the thesis doesn't apply to today's society because in reality things are much more complicated than it seems in the book the Brave New World. ...read more.