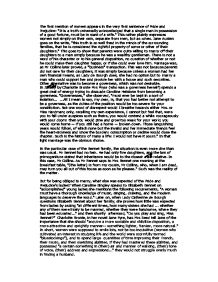 Attitudes to Women in Pride and Prejudice

The first mention of women appears in the very first sentence of Pride and Prejudice: "It is a truth universally acknowledged that a single man in possession of a good fortune, must be in want of a wife." This rather plainly expresses women not simply on their own, separate from men, but as wives. Jane Austen goes on the write, "this truth is so well fixed in the minds of the surrounding families, that he is considered the rightful property of some or other of their daughters." This goes to show that parents were quite willing to marry off their daughters to a man simply because he was a wealthy gentleman. There is not a word of his character or to his general disposition, no question of whether or not he could make their daughter happy, or if she could ever love him. Marriage was, as Mr Collins later proves, a "business" transaction. ...read more.

Mr Bennet had no heir. He had only five daughters, and the law of primogeniture stated that inheritance would be to the closest male relative. In this case, Mr Collins. As Mr Bennet says to Mrs Bennet one morning at the breakfast table, "(the letter) is from my cousin, Mr Collins, who, when I am dead, may turn you all out of this house as soon as he pleases.'' Such was the reality of the matter. But for being obliged to marry, what else was expected of the Pride and Prejudice's ladies? When Caroline Bingley speaks to Elizabeth Bennet on "accomplished" young ladies she mentions the following requirements, "A woman must have a thorough knowledge of music, singing, drawing, and the modern languages to deserve the word." Later on, when Lady Catherine de Bourgh questions Elizabeth Bennet about her family, she proves how little was expected from ladies by asking "at different times, how many sisters she had ... ...read more.

"Something more of quickness" was not quite proper in a young lady, and definitely not thought of as any sort of accomplishment. Lady de Bourgh is disgusted at Lizzy's readiness of tongue and exclaims, "Upon my word! You give your opinion very decidedly for so young a person." Lizzy is appreciated only by Jane, her father, and Mr Darcy, all of whom are intuitive and intelligent people. Mr Bennet and Mr Darcy are both not conformers to society and its biased views, and Jane is too sweet to dislike anybody. Women like Elizabeth had a hard time being intelligent and almost manly in their outlook on life. The general attitude then, can be described as a hope that women would be "attractive and sprightly" and not hope to be too enlightened. They should not dare to appear more intelligent than the "superior" sex, and should be accomplished in the proper manner. It was not too much to ask for, was it? ...read more.