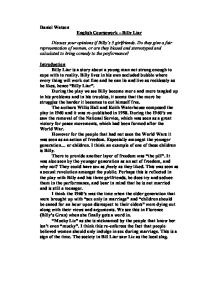 Billy Liar - Discuss your opinions of Billy's 3 girlfriends. Do they give a fair representation of women, or are they biased and stereotyped and calculated to bring comedy to the performance?

Daniel Watson English Coursework - Billy Liar Discuss your opinions if Billy's 3 girlfriends. Do they give a fair representation of women, or are they biased and stereotyped and calculated to bring comedy to the performance? Introduction Billy Liar is a story about a young man not strong enough to cope with to reality. Billy lives in his own secluded bubble where every thing will work out fine and he can lie and live as recklessly as he likes, hence "Billy Liar". During the play we see Billy become more and more tangled up in his problems and in his troubles, it seems that the more he struggles the harder it becomes to cut himself free. The authors Willis Hall and Keith Waterhouse composed the play in 1960 and it was re-published in 1998. During the 1960's we saw the removal of the National Service, which was seen as a great victory for peace movements, which had been formed after the World War. However for the people that had not seen the World Wars it was seen as an action of freedom. Especially amongst the younger generation... or children. I think an example of one of these children is Billy. There to provide another layer of freedom was "the pill". It was also seen by the younger generation as an act of freedom, and why not? They could have sex as freely as they liked. This was seen as a sexual revolution amongst the public. ...read more.

Barbara I think that whilst the authors were writing this play they were trying to bring three very different girls into the play perhaps ranging from one extreme to the other. If this was so, then Barbara would be one extreme! She is beyond her age and very mature. Barbara gives very sophisticated comedy to the play and by this I mean that we do not laugh at what she says or does, we laugh at the way she is. Barbara is very simple and I think she is defiantly meant to bring comedy to the play, otherwise what would the oranges be there for? For instance during the death of Billy's grammar she still manages to eat an orange. I think she is an example of what the elders expected of girls in the sixties, sweet and innocent. I think that in terms of pace, Barbara is slow and not very exciting. I mean this literally as well, she seems to add extra words into her speech, just like an elderly person would such as, "Come on Billy." When it could just be, "Come on." I think that the further we go back in language the less abbreviations they were. That's why I think old people tend to do what Barbara does. I think this helps us see an insight into what her personality is made up of. Rita Jumping straight from one extreme to the other, we have Rita who is the complete opposite of Barbara. ...read more.

As I have said before, I don't think Rita was thought up to make us laugh, I think she is there as a wake up call due to her violent nature, she seems to think that is the way to resolve her problems! Liz Just like Barbara I believe that Liz does not contribute to any theme in the play. After all she only appears for a short time in Act 3. I do how ever; think that Liz brings some elements of romance to the play when she does appear. All though we see no actions of romance the way Liz and Billy communicate suggests that there is a source of real love and affection between them. For instance in act three the Billy asks why Liz did not ring and Arthur keeps asking question in which none of them answer and carry on with their conversation. I think this shows romance because when visually watching a couple on TV and reading in books it is always a way that directors use to show that there is affection. Liz is a free spirit, one of these people that is likely to say, "The world is my oyster" . Conclusion I can confidently say that I do not believe that Liz and Barbara have been stereotyped. I think that Barbara has been modified and configured to bring comedy and that Liz has to been changed to bring romance to the play. I noticed my-self using the word society and talking about how people if the 1960's were, for this reason I believe that the play relates to the 1960's and is about the 1960's, it is relevant to contemporary society. ...read more.