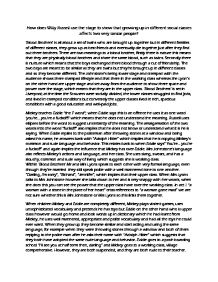 How does w***y Russell use the stage to show that growing up in different social classes affects two very similar people? 'Blood Brothers' is all about a set of twins who are brought up together but in different families of different classes, they grow up as best friends and eventually die together just after they find out there brothers. There are two meanings to a blood brother, firstly there is nature this means that they are physically blood brothers and share the same blood, such as twins. Secondly there is nurture which means that the boys exchanged there blood through a cut of friendship. The two boys are meant to be similar as they are twins but they're brought up in different classes and so they become different. The Johnstone's being lower stage and cramped with the audience shows there cramped lifestyle and that there in the working class whereas the Lyon's on the other hand are upper stage and set away from the audience to show there space and power over the stage, which means that they are in the upper class. 'Blood Brothers' is set in Liverpool; at the time the Scousers were socially divided, the lower classes struggled to find jobs, and lived in cramped conditions but conversely the upper classes lived in rich, spacious conditions with a good education and well-paid jobs. ...read more.

Mrs Lyons however is very well spoken; she wants everyone to think of Eddie as a higher class person so she does not let him mix with the lower class that live at the bottom of the street, which shows her class. In act 1 and act 2 the boys meet at similar points, this mirrors the fact that the boys are the same- like there are two acts, there are two of them. Eddie has a good education as he says things like "I'll look it up in the dictionary"- fact that he both owns and can use a dictionary shows he is higher class and has more money and a better education. Mickey who has a poor education shows when Eddie mentions the dictionary he replies "what's that", showing that he not only cannot use one, but is unsure of what one is. This lack of education soon hits Mickey in the face when it comes to finding a job. Mickey works in a factory owned by Mr Lyons and Eddie is a town councilor which shows that having an education will get you further in life. Mrs Johnstone and her lack of education has got her know where. This is shown as she works as a maid at the Lyons home. She is very superstitious with everything she does like when the new pair of shoes was put onto Mrs Lyon's table. ...read more.

The separation on stage shows that there was a huge difference in the lives and living conditions of the upper and lower classes. The space in the middle shows that they cannot migrate into the other's life and class bracket, and that, when they meet their characters change. This is shown when Mickey and Eddie meet in the middle of the street where they first become similar, Eddie is know longer upper class or lower class and the same for Mickey. By laying out the stage so the characters are in different parts according to their class is effective as it shows how two people can be completely changed by there upbringing. It also shows that when both Mrs Johnstone and Mrs Lyons get a taste of each others lives the find themselves changing into the other person. The reason that Russell wanted to show how people from different classes have different life experiences was the fact that this was happening to real people and he wanted to highlight the fact and make it more obvious to the audience that this was changing and affecting people's lives. Showing that social class can change people has both a powerful effect and advantage to show people they can change. It was very effective and this showed in many ways. This whole play was cross referenced to Marilyn Monroe who is glamorous but died tragically, which implies both quest for glamour and a tragic ending. ?? ?? ?? ?? ...read more.