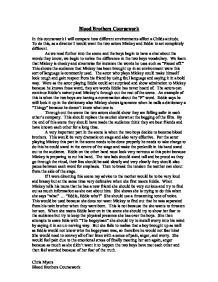 Blood Brothers Coursework In this coursework I will compare how different environments affect a Childs attitude. To do this, as a director I would want the two actors Mickey and Eddie to act completely different. As we read further into the scene and the boys begin to have a chat about the words they know, we begin to notice the difference in the two boys vocabulary. We learn that Mickey is cheeky and streetwise for instance the words he uses such as "Pissed off." This shows the audience that Mickey has been brought up in an environment were this sort of language is commonly used. The actor who plays Mickey could make himself look tough and gain respect from his friend by using foul language and saying it in a bold way. Were as the actor playing Eddie could act surprised and show admiration to Mickey because he knows these word, they are words Eddie has never heard of. ...read more.

When Mickey tells his mum that he has a new friend she should be very curious and try to find out as much information as she can about him. She shows she is trying to do this when she says "what" ... "Eddie, Eddie who?" She should use a threatening tone of voice. This would be used because she does not want Mickey to find out that he was separated from his twin brother when they were born. This is not because the she wants to threaten her son. When she meets Eddie later on in the scene she should try to show her fear to the audience but try to keep the physical presence she has over the boys. She then attempts to scare Edie with "The bogeyman" she should try to install worry into his mind by saying it in an un-nerving way. But she fails to realise that a boy brought up as well as Eddie would not know who the bogeyman was, so therefore he would not fear him! ...read more.

The actor taking on Mickey's roll should accentuate these words; this will help deliver some clues to his social background. On the other hand the actor taking on the roll of Eddie would need to use very different words and also deliver them properly to show he has received a higher level of education and was brought up by a family he uses received pronunciation. So he should use words such as "Hello" and "Super" to provide the audience with a contrast of him and Mickey and his mother. He should also not show fear of the words such as "the bogeyman" and the "F" word because he does not know the meaning of them. If he repeats these words the actor playing him should do so without showing sense that he knows their meanings. If he does this he will give the audience an insight into his background and also add to the comedy evident in this scene. The characters need to use the following advice when taking on their rolls of their characters on stage. ?? ?? ?? ?? Chris Myers Blood Brothers Coursework ...read more.