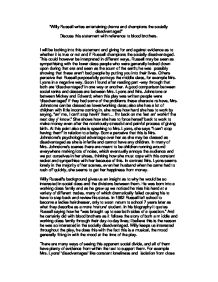 "Willy Russell writes entertaining drama and champions the socially disadvantaged" Discuss this statement with reference to blood brothers. I will be looking into this statement and giving for and against evidence as to whether it is true or not and if Russell champions the socially disadvantaged. This could however be interpreted in different ways, Russell may be seen as sympathising with the lower class people who were generally looked down upon during that era and seen as the scum of the earth; he was possibly showing that these aren't bad people by putting you into their lives. Others perceive that Russell purposefully portrays the middle class, for example Mrs. Lyons in a negative way. Soon I found after reading part-way through that both are 'disadvantaged' in one way or another. A good comparison between social ranks and classes are between Mrs. Lyons and Mrs. Johnstone or between Mickey and Edward; when this play was written people were 'disadvantaged' if they had some of the problems these characters have, Mrs. Johnstone can be classed as lower/working class; also she has a lot of children with little income coming in. she notes how hard she has to work by saying, "an' me, I can't stop havin' them... I'm back on me feet an' workin' the next day y' know." She shows how she has to force herself back to work to make money even after the notoriously stressful and painful process of giving birth. At this point also she is speaking to Mrs. Lyons, she says "I can't stop having them" in relation to a baby. ...read more.

Johnstone's superstition had rubbed off onto the children as they chant a rhyme about how they will be punished in hell for saying it. However as the boys grow closer they share jokes and their different upbringing become apparent again in their language and use of it. The boys find a swear word very funny and when Eddie says he will look the "F" word up in the dictionary, Mickey is clueless to what the object is. Maybe that though was a technique used by Russell, as I found that part to be quite funny and light-hearted, in this innocent comedy he could be making us sympathise with the character in that Mickey may not know any better. The differences between the boys creates humour as one is very bright and willing to share his sweets whereas the other is all too eager to accept the sweets as he rarely gets offered them (essentially then, these two are complete opposites). Even the way Mickey says, "give us a sweet" may be seen as rude, for the fact he didn't say please, the slang and the fact they've only just met. Then the opinions of the two show, of how they feel about each other, Mickey not knowing much in the way of values calls Eddie "soft", which I've done some research into to conclude that he's either calling him homosexual (something looked down upon in 1970's Liverpool) or saying that he's posh and doesn't know how to look after himself. And coming back to humour, I found the play at some parts to be quite hilarious, for example when Mickey constantly reiterates that he's not 7 but "almost 8", I remember (when watching the performance and reading the script) ...read more.

follows straight after Eddie and Mickey realise that they are the same two boys who used to play together when they were eight, and a joyful re-union takes place. This change all seems to happen quite quickly and would come across as a shock to the audience. Now, class and social status come into play a lot and I believe I've infact learnt something from reading the story that; difference in class shouldn't affect more important things like friendship, and status can alter one's personality as well as jealousy or wanting to be like someone else. This is what I believe Russell wanted us to learn from this play Whether Russell 'champions the socially disadvantaged' is another question, maybe he uses contrasting characters to portray his ideas on socially disadvantaged people during the 1980s (Mrs. Johnstone to Mrs. Lyons and Mickey to Eddie). To some people they may appear as the victims and unfortunates as they can't really do anything to help the fact they're poor and essentially living hand to mouth. In my opinion maybe he was sympathising with them as we know that he himself was born into a working class family, and with the fact he tried his hand at a large majority of differnet trades he would've made a variety of observations (hense maybe his inspiration for Blood Brothers). Overall, the themes in the play come together to make a very entertaining piece and it seems that there is diverse opinion as to whether he champions the disadvantaged; In my view though that was what Russell intended. ...read more.