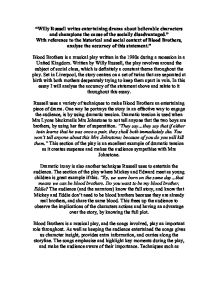 Willy Russell writes entertaining drama about believable characters and champions the cause of the socially disadvantaged. With reference to the historical and social context of Blood Brothers, analyse the accuracy of this statement.

"Willy Russell writes entertaining drama about believable characters and champions the cause of the socially disadvantaged." With reference to the historical and social context of Blood Brothers, analyse the accuracy of this statement." Blood Brothers is a musical play written in the 1980s during a recession in a United Kingdom. Written by Willy Russell, the play revolves around the subject of social class, which is definitely a constant theme throughout the play. Set in Liverpool, the story centres on a set of twins that are separated at birth with both mothers desperately trying to keep them apart in vain. In this essay I will analyse the accuracy of the statement above and relate to it throughout this essay. Russell uses a variety of techniques to make Blood Brothers an entertaining piece of drama. One way he portrays the story in an effective way to engage the audience, is by using dramatic tension. Dramatic tension is used when Mrs Lyons blackmails Mrs Johnstone to not tell anyone that the two boys are brothers, by using her fear of superstition. "They say...they say that if either twin learns that he was once a pair, they shall both immediately die. ...read more.

The reference to guns and "it's just a game" is repeated throughout the play, and relates to the twin's death at the end as both of them are shot. At the end of the play it's not just a childish game, and the reality becomes too difficult for the characters to deal with. The quotation implies a long for childish innocence from all the characters, and a cry for help from the tragic ending. Although the outcome of the Blood Brothers storyline is tragic, Russell adds comedy and humour throughout. When the boys first meet, an example of Russell's humour occurs; "So they took him to the hospital an' put a plate in his head...A plate? A dinner plate?" Russell lightens the mood by injecting humour into a scene full of tension and irony. The comedy in the play makes Blood Brothers a more enjoyable and entertaining piece of drama for the audience to watch. By adding this childlike humour into the play, it shows that Russell can invent realistic and believable characters which make the audience more likely to sympathise with the characters. ...read more.

He treats Mrs. Jhonstone with a little amount of respect and refers to her as Missis, also he threatens to take her to court "or worse". When the policeman visits Edward's home he speaks respectfully towards Mr. Lyons and regards him as "Sir", or "Mr Lyons". Also he tries to make out that it wasn't a crime by saying to Mr. Lyons "...It was more of a prank, really, Mr. Lyons...I'd just dock his pocket money if I was you..." Here Russell champions the cause of the socially disadvantaged, and demonstrates this important theme. Blood Brothers is also relevant in the time in which it was set. The recession and lack of jobs is strongly referenced to especially as Edward and Mickey grow older, and Mickey struggles to find a job while Edward is still happily rich. The reference to real historic events, make the characters more plausible and realistic and relevant songs relating to the recession are demonstrated throughout the play. In my opinion, Blood Brothers is an entertaining play involving realistic and believable characters. After analysing the statement, I believe that Willy Russell successfully champions the cause of the socially disadvantaged, and shows effectively the issue of social class. ...read more.