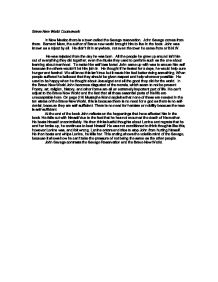 Brave New World Coursework In New Mexico there is a town called the Savage reservation. John Savage comes from there. Bernard Marx, the author of Brave new world brought him to live in the book. John was known as a reject by all. He didn't fit in anywhere, not even the town he came from or B.N.W. He was rejected from the day he was born. All the people he grew up around left him out of everything they did together, even the rituals they used to perform such as the one about learning about manhood. ...read more.

He used to be happy when he thought about Jesus/god and all the good they did for the world. In the Brave New World John becomes disgusted of the morals, which seem to not be present. Poetry, art, religion, history, and other forms are all an extremely important part of life. He can't adjust to the Brave New World and the fact that all these essential parts of his life are unacceptable here. On page 216 Mustapha Mond explains that none of these are needed in the ten states of the Brave New World, this is because there is no need for a god as there is no self-denial, because they are self-sufficient. ...read more.

He falls out with himself due to the fact that he has not mourned the death of his mother. He beats himself uncontrollably. He then thinks lustful thoughts about Lenina and regrets that he and her broke up, he continues to beat himself. He was not conditioned to think thoughts like this, however Lenina was, and felt wrong. Lenina enters and tries to stop John from hurting himself. He then beats and whips Lenina, he kills her. This ending shows the volatile mind of the Savage, because it shows how he can't take the pressure of not being the same as the other people. John Savage contrasts the Savage Reservation and the Brave New World. ...read more.