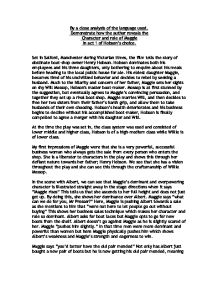 By a close analysis of the language used, how the author reveals the Character and role of Maggie In act 1 of Hobson's choice.

By a close analysis of the language used, Demonstrate how the author reveals the Character and role of Maggie In act 1 of Hobson's choice. Set in Salford, Manchester during Victorian times, the film tells the story of obstinate boot-shop owner Henry Hobson. Hobson dominates both his employees and his three daughters, only bothering to enquire about his meals before heading to the local public house for ale. His eldest daughter Maggie, becomes tired of his uncivilized behavior and decides to rebel by seeking a husband. Much to the hilarity and concern of her father, Maggie sets her sights on shy Will Mossop, Hobson's master boot-maker. Mossop is at first stunned by the suggestion, but eventually agrees to Maggie's convincing persuasion, and together they set up a rival boot shop. Maggie marries Will, and then decides to free her two sisters from their father's harsh grip, and allow them to take husbands of their own choosing. Hobson's health deteriorates and his business begins to decline without his accomplished boot-maker, Hobson is finally compelled to agree a merger with his daughter and Will. At the time the play was set in, the class system was used and consisted of lower middle and higher class, Hobson is of a high-medium class while Willie is of lower class. My first impressions of Maggie were that she is a very powerful, successful business woman who always gets the sale from every person who enters the shop. ...read more.

Maggie asks Willie to marry her when Willie says "I'm tokened to Ada Figgins" Maggie responds to this in a surprised way as she always wins what she wants and fights for. Willie says to Maggie "I wish you'd leave me alone" From him saying this, we can see the lack of confidence and fearfulness of his character. Willie gets quite nervous when talking bout sensitive matters such as the proposal of Maggie; he starts to stutter a bit but later on becomes very ambitious and optimistic about it. Ada enters in the scene as a sandy girl who looks poor spirited and poor blooded in clogs and shawl. She also appears to be of a lower class. Ada enters with Willie's dinner in a basin, carried in a handkerchief. Maggie approaches Ada and tells her that she is "treading on her foot" Ada responds to this by looking at her feet, which tells us that she is slightly stupid. Maggie doesn't want the competition of Ada because of what she sees in Willie. Willie tries speaking to Ada and Maggie but has no luck as Maggie interrupts him saying "you hold your hush" This tells us that Willie's character has not yet fully developed into the confident person that he is going to be. Ada reveals that Willie plays an instrument and sees something special in it. He plays the Jews harp and Maggie finds this both amusing and pathetic. However, Ada is bedazzled by it. ...read more.

he is surprised at first and comical about it but later realises that Maggie is serious, when she says, "you said I was too old to get a husband." This shows us her defiant nature towards her father's attitude. "I'm marrying Willie Mossop. And now I'll tell you my terms." Here, Maggie is demonstrating her dominance over Hobson. She uses an imperative to command him to follow her terms and take them into account. "If Willie goes, I go." Here, Maggie is threatening Hobson with her overall dominance over him. She also gives us the impression that she has everything under control and is a liberator. When Willie enters back into the shop, he is threatened by Hobson with his belt. Willie reacts to this by saying, "If you touch me with that belt, I'll take her quick, aye, and stick to her like glue." When Hobson strikes Willie, he kisses Maggie with temper and not with passion. Maggie responds to his defiance to Hobson by complimenting him and putting her arm around his neck, while 'Hobson stands in amazed indecision.' At the end of the play we see a metamorphism in the character of Willie, he used to be a timid, fearful, unconfident low class citizen but after Maggie's educating of him, we see a new confident, ambitious, fearless and optimistic person. Maggie's overall role in the play as a liberator pays off at the end as she brought Willie up to his full potential and transformed him. In conclusion I found that Maggie's character in the play is very dominant and liberating to other characters, however Maggie's role as a liberator and vision seeker shows off in numerous ways. ...read more.