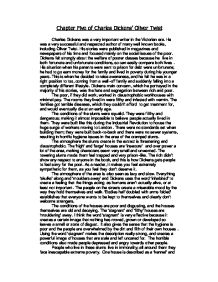 Chapter Five of Charles Dickens' Oliver Twist Charles Dickens was a very important writer in the Victorian era. He was a very successful and respected author of many well known books, including Oliver Twist. His stories were published in magazines and newspapers of his time and focused mainly on the social issues of the poor. Dickens felt strongly about the welfare of poorer classes because he live in both fortunate and unfortunate conditions, so can easily compare both lives. His situation when his parents were sent to prison for debt were unfortunate; he had to go earn money for the family and lived in poverty during his younger years. This is when he decided to raise awareness, and he felt he was in a right position to too, coming from a well-off family and suddenly falling into a completely different lifestyle. Dickens main concern, which he portrayed in the majority of his stories, was the hate and segregation between rich and poor. The poor, if they did work, worked in claustrophobic workhouses with minimal pay. The rooms they lived in were filthy and infested with vermin. ...read more.

It also gives the sense that the hygiene is poor and the people are overwhelmed by the dirt and filth of their own houses. Using the word 'stagnant' makes the description really strong, and creates a powerful image of houses that are stale and left uncared for. The horrible conditions also made people depressed and angry towards other people. People who live in these slums live in immorality; all around them they face inescapable extreme poverty. One house is described as a 'kennel' and other 'crazy dens.' Also the unavoidable dead rats are 'hideous with famine.' All this shows haw badly the people live, if rats are described in such a simple phrase, then the people's health must be indescribable. Furthermore, the people have been degraded to live like dogs, living in a 'kennel.' Using the words 'crazy den' and 'kennel' really makes you see that the people were treat worse than animals, hiding away, rotting in a decaying habitat. 'Kennels' creates an image of an empty, dark, cold and lonely place to 'live.' The things living in these 'kennels' would be neglected and seen as minorities. ...read more.

This surreptitiously makes the reader focus more on the poor mans story, and once more creating a sense of sympathy and hate towards the richers. Dickens very much focuses on the cold heartedness of the rich when it comes to a very emotional event; death. This is an extremely powerful way to 'win' the reader's feelings for the poor. You can see this is one of the main points Dickens tried so hard to express to the rich; if they had helped or even became equal, lives would have been saved and happiness and harmony would have been portrayed to all levels of wealth. Dickens is trying to make everyone see that the poor are the stronger ones; coping with everyday despair, sorrow, hate and grief. He wanted people to realise that the poor should be the ones who are blessed with love and a better quality of life and standard of living, from their lives of hard work which resulted in small pay and illness, not the richers who just happened to be brought up into a wealthy family and inherited grandparent's money to survive, but not done anything to deserve it. In Dickens' eyes, the rich were clearly seen as disgusting people, people who did not deserve what they had. ?? ?? ?? ?? ...read more.