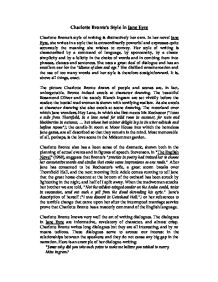 Charlotte Bronte's Style in Jane Eyre Charlotte Bronte's style of writing is distinctively her own. In her novel Jane Eyre, she writes in a style that is extraordinarily powerful and expresses quite accurately the meaning she wishes to convey. Her style of writing is characterized by a command of language, by spontaneity, by a chaste simplicity and by a felicity in the choice of words and in combing them into phrases, clauses and sentences. She uses a great deal of dialogue and has an excellent ear for the "idioms of class and age." She disliked ornamentation and the use of too many words and her style is therefore straightforward. It is, above all things, exact. The picture Charlotte Bronte draws of people and scenes are, in fact, unforgettable. ...read more.

Stevenson, in "The English Novel" (1960), suggests that Bronte's "practice in poetry had trained her to choose her connotative words and similes that evoke sense impressions as one reads." After Jane has consented to be Rochester's wife, a great storm breaks over Thornfield Hall, and the next morning little Adele comes running to tell Jane that the great horse-chestnut at the bottom of the orchard has been struck by lightening in the night, and half of I split away. When the madwoman attacks her brother we are told, "Not the wildest-winged condor on the Andes could, twice in succession, send out such a yell from the cloud shrouding his eyrie." Jane's description of herself ("I was discord in Gateshead Hall.") or her references to the terrible change that came upon her after the interrupted marriage service prove that Charlotte Bronte has a masterly command of the English language. ...read more.

Did you think nothing of Miss Ingram's feelings, sir? Rochester: her feelings are concentrated in one - pride; and that needs humbling." Earl A. Knies, in "The Art of Charlotte Bronte" (1969), follows his predecessors in decrying a too completely autobiographical approach. He hope "to show that she is more than the inspired improviser and fictionalized autobiographer that she was long considered to be." While there are certainly autobiographical elements in her novels, Charlotte rearranges and transmutes her materials so that they show "a marked degree of pattern and objectivity." The first-person narrative has been disparaged by Henry James and his successors because the speaker cannot deal with scenes at which he is not present and cannot without difficulty or self-glorification characterize himself. However, Charlotte Bronte solves both problems smoothly. In Jane Eyre the first-person narrative is its strength. The very fact that we see everything through Jane's eyes gives the novel both the unity and the intensity which make sit the work of genius it is. A.Khalifa ...read more.