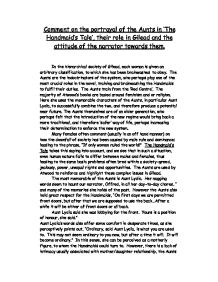 Comment on the portrayal of the Aunts in 'The Handmaid's Tale', their role in Gilead and the attitude of the narrator towards them.

Comment on the portrayal of the Aunts in 'The Handmaid's Tale', their role in Gilead and the attitude of the narrator towards them. In the hierarchical society of Gilead, each woman is given an arbitrary classification, to which she has been brainwashed to obey. The Aunts are the indoctrinators of the system, who perhaps play one of the most crucial roles in the novel, training and brainwashing the Handmaids to fulfil their duties. The Aunts train from the 'Red Centre'. The majority of Atwood's books are based around feminism and or religion. Here she uses the memorable characters of the Aunts, in particular Aunt Lydia, to successfully combine the two, and therefore produce a potential near future. The Aunts themselves are of an older generation, who perhaps felt that the introduction of the new regime would bring back a more traditional, and therefore 'safer' way of life, perhaps increasing their determination to enforce the new system. Many females often comment (usually in an off hand manner) on how the downfall of society has been caused by male rule and dominance; leading to the phrase, "If only women ruled the world!" ...read more.

This may not seem ordinary to you now, but after a time it will. It will become ordinary." In this sense, she can be perceived as a motherly figure, to whom the Handmaids could turn to. However, there is a lack of intimacy usually associated with mother/daughter relationship, the Aunts and the Handmaids have more of a teacher/pupil relationship. The Aunt's lessons are obviously conducted and well calculated, due to the fact Offred seems to have memorized many of Aunt Lydia's phrases, "Not all of you will make it through. Some of you will fall on dry grounds or thorns. Some of you are shallow-rooted." These poignant words emphasise the pressure enforced onto the Handmaids to conceive and succeed by quietly conforming to the dictatorial regime. However there is also a more sinister and intolerant side to the Aunt's characters, and their authority is accentuated by the, "...electric cattle prods slung on thongs from their leather belts." However their status does not permit them to be, "trusted with guns" as the male guards are. ...read more.

Never forget it. To be seen - to be seen - is to be-her voice trembled - penetrated." However, Offred also feels resentment and sheer hatred towards them due to the enforcement they inflicted onto her friend Moira-a feminist against Gilead, "They took her into a room that used to be the Science Lab. It was a room none of us ever went willingly. Afterwards she could not walk for a week, her feet would not fit into her shoes, they were too swollen...they looked like lungs." However, whatever our narrator feels towards them, it is obvious she cannot forget their chilling messages of conspiracy. Due to the slight mystery behind the Aunts themselves, regarding their backgrounds and true attitudes towards the regime, we are left feeling rather unsatisfied by their characters. Due to the style of Atwood's writing, which really involves the reader into the emotional turmoil of the narrator, one takes on a similar attitude as Offred-an arrange of mixed feelings. However, these generally tend to lean towards the loathing of the Aunts at their patronizing and rather annoying remarks. After all they are the enforcers of the regime who appear to hold little sympathy towards their fellow females. ...read more.