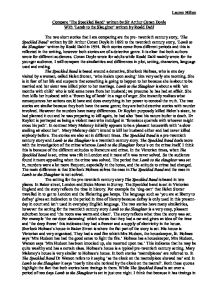 Lauren Hilton Compare 'The Speckled Band' written by Sir Arthur Conan Doyle With 'Lamb to the Slaughter' written by Roald Dahl The two short stories that I am comparing are the pre- twentieth century story, 'The Speckled Band' written by Sir Arthur Conan Doyle in 1892 to the twentieth century story, 'Lamb to the Slaughter' written by Roald Dahl in 1954. Both stories come from different periods and this is reflected in the writing, however both stories are of a detective genre. It is clear that both authors wrote for different audiences. Conan Doyle wrote for adults while Roald Dahl mainly wrote for the younger audience. I will compare the similarities and differences in plot, setting, characters, language used and ending. The Speckled Band is based around a detective, Sherlock Holmes, who is one day visited by a woman, called Helen Stoner, 'who insists upon seeing' him very early one morning. She is in fear of her life and suspects that something is going to happen to her because she is about to be married and her sister was killed prior to her marriage. Lamb to the Slaughter is about a wife 'six months with child' who is told some news from her husband; we presume he has had an affair. She then kills her husband with a 'frozen leg of lamb' in a rage of anger. She instantly realises what consequences her actions could have and does everything in her power to conceal the truth. The two stories are similar because they both have the same genre; they are both detective stories with murder involved. ...read more.

There is a great difference between Helen Stoner's and Mary Maloney's, from Lamb to the Slaughter, appearance. Mary Maloney's face has 'a wonderful translucent quality' and her eyes have a 'new placid look'. Both stories describe both the characters appearance in a lot of detail. Helen Stoner is in fear of her life and she was in a 'pitiable state of agitation' when she arrived at Sherlock Holmes's house. While Mary Maloney would 'glance up at the clock' waiting for Patrick to return home from work 'without anxiety'. These quotes highlight that Helen is very tense and scared and Mary is a very calm and relaxed person. Sherlock Holmes is a very thorough detective and pays great attention to detail and this is shown throughout The Speckled Band. For example he noticed that Helen Stoner had travelled in a dogcart because her jacket was 'splattered with mud' and 'the marks are perfectly fresh'. Sherlock Holmes had never met Helen Stoner or any of her family including Dr Roylett before. However Jack Noonan knew Mary and Patrick Maloney on a very well. Patrick worked with Jack Noonan in the police force. This could of affected the way the case was handled and could of helped eliminate some of the suspects. Because Noonan knew Mary on a personal basis it could of affected the way she was eliminated from being a suspect. He obviously thought of her as the kind of person who wouldn't even consider to comet such a crime and that she had no reason to do so anyway. ...read more.

At the end of The Speckled Band the venom of the snake kills Dr Roylott when he was bitten while he was attempting to kill Helen Stoner. At the end of Lamb to the Slaughter the police eat the evidence and Mary is not suspected of killing her husband. The Speckled Band is the story with the twist in the tale. Initially I thought that Dr Roylott would be found out and be put in jail but instead he is killed by his own snake and as Holmes says ' Violence does, in truth, recoil upon the violent, and the schemer falls into the pit which he digs for another'. The effect that it has on the reader when the story doesn't end the way you expect is that they enjoy it more because it isn't as predictive. The title The Speckled Band fits in with the pre-twentieth century. The Speckled Band is something that is actually in the story, but it is not discovered what it is until the end. The title Lamb to the Slaughter is a biblical term, it tells you what is going to happen. The title means two things. It means that Patrick was slaughtered by the lamb because he was hit over the head with the lamb and it also means that the detectives are the Lamb to the Slaughter because they eat the lamb, which is evidence. I enjoyed The Speckled Band more because you can try to solve the crime as you read it. I found The Speckled Band more appealing, it is also more compelling because it was a more complicated story with many possibilities. ...read more.