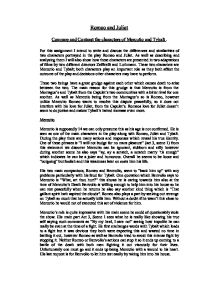 Compare and Contrast the characters of Mercutio and Tybalt.

Romeo and Juliet Compare and Contrast the characters of Mercutio and Tybalt. For this assignment I intend to write and discuss the differences and similarities of two characters portrayed in the play Romeo and Juliet. As well as describing and analysing them I will also show how these characters are presented in two adaptations of films by two different directors Zeffirelli and Lurhmann. These two characters are Mercutio and Tybalt; both characters play an important role as they both affect the outcome of the play and decisions other characters may have to perform. These two beings have a great grudge against each other which causes death to arise between the two. The main reason for this grudge is that Mercutio is from the Montague's and Tybalt from the Capulet's two communities with a bitter rival for one another. As well as Mercutio being from the Montague's so is Romeo, however unlike Mercutio Romeo wants to resolve this dispute peacefully, so it does not interfere with his love for Juliet, from the Capulet's. Romeos love for Juliet doesn't seem to do justice and makes Tybalt's hatred increase even more. Mercutio Mercutio is supposedly 14 we can only presume this as his age is not confirmed. He is seen as one of the main characters in the play along with Romeo, Juliet and Tybalt. ...read more.

This shows he would be cruel to the most honourable of people. We can already see how villainous Tybalt can be just by using words. Tybalt has very few close friends or companions that we witness during the play. His main relations are his uncle lord Capulet and as mentioned before he is the cousin to Juliet. As there have not been a lot of influence from other people to be good this could be one of the reasons why he is so "hot headed". The only people to guide him is people mentioned e.g. when he sees Romeo at the Capulet party, his immediate instinct is to fight, but only the increasingly firm warnings from Capulet to hold his peace restrain him. Juliet also sees wants to protect him the reason being of there relationship with him this also makes Romeo more forgiving towards him as he wants the best possible relationship possible. He does not speak many lines, but he influences the entire course of the play to a degree that exceeds his seemingly minor role in it. Throughout the play, he demonstrates his angry, resentful, and stubborn nature. When Tybalt first appears, Benvolio is attempting to stop the servants of the Capulet and Montague households from fighting. ...read more.

I feel by mixing this theme it had a great effect but left some of the audience confused especially since it was suppose to target the young audience. In the Zeffirelli film the props were exactly how I imagined it, by setting it in an environment where there were hardly any modern facilities or any blatant ones also the costumes were made to look as though it were in the 16th/17th century. It was fairly regular with no unusual surprises unlike the Lurhmann film. In the Lurhmann production he "exaggerated" the characters so it was more obvious to distinguish how they are portrayed e.g. at the scene of the party Tybalt is dressed as the devil, here just by his costume his personality is fitted perfectly so the audience can see. As well as Tybalt wearing "new" clothing so is every other actor in the movie. The setting is far more expanded and the film has more facilities such as fireworks and cars. Overall I enjoyed the Lurhmann version more as it appealed to me more with its time period rather then the predictable Zeffirelli version. In conclusion I have discussed the issues or points of the two characters Tybalt and Mercutio, I have also managed to show there good and bad points. Overall out of the two characters I prefer Mercutio as he was more humorous then Tybalt. By Asim ...read more.

This essay tries to cover too many points and the result is that too many points are covered too briefly. There needs to be a clear plan for this essay in order to direct the structure of the response and ensure greater coherence.