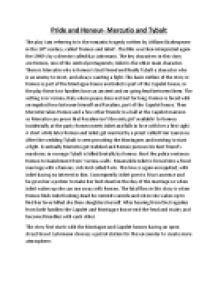 ﻿Pride and Honour- Mercutio and Tybalt The play I am referring to is the romantic tragedy written by William Shakespeare in the 16th century, called ?Romeo and Juliet?. The film was then interpreted again the 1990?s by a director called Baz Luhrmann. The key characters in this story are Romeo, one of the central protagonists; Juliet is the other main character. There is Mercutio who is Romeo?s best friend and finally Tybalt a character who is an enemy to most, and always wanting a fight. The basic outline of the story is: Romeo is part of the Montague house and Juliet is part of the Capulet house, in the play these two families have an ancient and on-going feud between them. The setting is in Verona, Italy where peace does not last for long. Romeo is faced with unrequited love between himself and Rosaline, part of the Capulet house. Then Mercutio takes Romeo and a few other friends to a ball at the Capulet mansion so Mercutio can prove that Rosaline isn?t the only girl ?available? to Romeo. Incidentally at the party Romeo meets Juliet and falls in love with her a first sight. A short while later Romeo and Juliet get married by a priest called Friar Laurence. After the wedding Tybalt is seen provoking the Montagues and insisting to start a fight. ...read more.

After the Capulets enter, the surrounding public is scared a frightened with an atmosphere of silence and quietness takes over the beach. It is obvious to see that society is afraid of the family feud and prospect of Tybalt starting a fight. Then Tybalt insults Mercutio by saying ‘thou art consort with Romeo’. Mercutio takes this the wrong way and thinks he possibly could have meant do you ‘homosexually like’ Romeo? Mercutio clashes with him the fight has started. Luhrmann uses dramatic and loud music to portray this mêlée. Also there are handheld camera shots of the two foes, showing the viewers the characters reactions and facial expressions. After Tybalt and Mercutio have thrown their insults at each other, Romeo pulls up in his car and tries to resolve the problem by shaking hands, but instead Tybalt rejects this offer and insists to fight with him. This action really reflects Tybalt’s overall personality; he is always ready to fight and is an aggressive and destructive character. But contrastingly he purposely removes his bullet proof vest to show he is ready for a fight to the death, additionally when Tybalt removes his vest it shows that he is expecting to win the fight. Lastly Tybalt’s friend Abra empties all of Tybalt’s bullets except for one which confirms that one person will die in the fight. ...read more.

Mercutio believes that he should not show his discomfort, distress, or worry as he feared he could be called a coward. After this is takes his late few steps and struggles onto Verona Beach and dies. In Mercutio?s final scene he is wearing a white shirt, this could indicate that he was innocent in this battle, as white is the colour of purity. Finally with Mercutio dying on the beach the sand could show that the brawl that had just happened could have been a ?western showdown? with the windy conditions, loud dramatic music and desert like surroundings. The water imagery used in Mercutio?s death is before the Capulets come to the beach, he is shooting into the water angry because of Romeo?s mystery towards them. His friend Benvolio insists that they leave otherwise they ?will not escape a brawl? as there is a lot of tension and anxiety between the opposing families. Also Mercutio dies on the beach which is near water, again showing the water imagery presented in this film. It is obvious to say now that water imagery is a symbol or foreshadows death. Finally to sum this essay up the characters Tybalt and Mercutio are portrayed and illustrated as slightly contrasting personalities by William Shakespeare and Baz Luhrmann. There are many similarities and difference between them, but overall in the story they are both represented as very proud and honourable characters, no matter how extreme and bizarre, every story must have some sort of entertainment. ...read more.