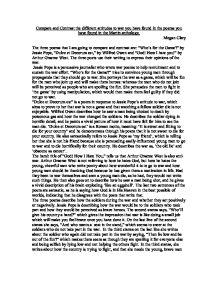 Compare and Contrast the different attitudes to war you have studied

Compare and Contrast the different attitudes to war you have found in the poems you have found in the Martin anthology. Megan Clary The three poems that I am going to compare and contrast are: "Who's for the Game?" by Jessie Pope, "Dulce et Decorum est," by Wilfred Owen and "God! How I hate you!" by Arthur Graeme West. The three poets use their writing to express their opinions of the war. Jessie Pope is a persuasive journalist who wrote war poems to help recruitment and to sustain the war effort. "Who's for the Game?" tries to convince young men through propaganda that they should go to war. She portrays the war as a game, which will be fun for the men who join up and will make them heroes: whereas the men who do not join will be perceived as people who are spoiling the fun. She persuades the men to fight in 'the game' by using manipulation, which would then make them feel guilty if they did not go to war. "Dulce et Decorum est" is a poem in response to Jessie Pope's attitude to war, which aims to prove to her that war is not a game and that watching a fellow soldier die is not enjoyable. Wilfred Owen describes how he saw a man being choked to death by poisonous gas and how the war changed the soldiers. ...read more.

Instead Arthur Graeme West describes the men as slowly dying humans and he also describes the dead soldiers lying in the trenches. He describes the men as being bored of the war, as they only sit around waiting to be attacked by the enemy. He says in the third stanza, "Proved that all muddy brown monotony," which shows us the tedium of war. Arthur Graeme West describes in vivid detail how he saw a man being shot, and he describes how he saw the man slowly dying, which makes you sympathise with him and the other soldiers because who saw such horrific events. In "Dulce et Decorum Est," Owen describes the men as tired, unenthusiastic and dirty, and he gives more detail than the two other poets. On the first line of the first stanza, he describes the men with similes as, 'Bent double, like old beggars,' which shows us that the men look unwell and older then they are due to the effect the war has had on them. On the second line, he says that the men were, 'Knock-kneed, coughing like hags, we cursed through sludge,' which shows us that they had developed an abnormality in the knees, causing them to walk differently, that they were finding it harder to breathe because they were coughing like old women, and that they were cursing as they walked through mud, which shows their lack of enthusiasm. ...read more.

In, 'God! How I hate you,' has a loud, quite slow clapping rhythm, which seems to get louder as his anger increases. This helps the reader to see Arthur Graeme West's anger and how it helps them to feel what he is thinking. In, 'Who's for the Game?' the rhythm is approximately the same speed as, 'God! How I hate you,' because they are both loud, although Jessie Pope was probably trying to make the rhythm sound enthusiastic rather then angry. This shows us that although the two poems are making different points, they both use the same rhythm for different purposes, unlike Dulce et Decorum Est, which has a slower beat which gradually gets faster. In conclusion, the poem which I least prefer is, 'Who's for the Game'. The reason for this is because the poem uses manipulation and propaganda to try and force men to go to war. It is not as gruesome and as graphic as the other two poems, and it does not describe horrific deaths in it; instead it portrays the war as a game and as something which will enable you to be seen as a hero and bring you glory if you die for your country. It glosses over the harsh realities of war and dishonestly lures young men towards a possible grim death. ...read more.