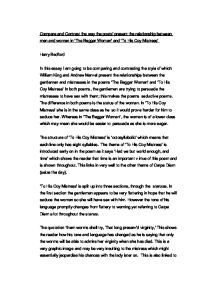 The end of this first stanza the speaker introduces a monetary metaphor, "Nor would I love at lower rate." This could be compared to an interest rate at a bank for lending money and that this is all the least he can do. He's metaphorically paying for what he wants. The pace in the poem increases as the verb "hurrying" introduces anxiety. "Time's winged chariot hurrying near" the "winged chariot hurrying" could be symbolic for the fact they might be rushing towards death, so they should "seize the day", linking to the theme once again. He now talks about their relationship if they were to be barren and have no children, 'Desert of vast eternity.' Deserts are hot and barren, so this could be a link to the denial of life, love and s****l activity. This would show the fact that they would not be having s****l intercourse, which would be very dull just like their relationship would be. This is different to the previous imagery of his 'vegetable love', as this would need a very moist atmosphere to grow, so there would be no 'vegetable love' found here. He is also linking back to the fact if she leaves it too long she will be barren. The speaker becomes more desperate in the next section and begins to warn and threaten the woman. The speaker repeats the sombre tone again whilst using another reference to the bible, 'into ashes all my l**t.' ...read more.

This also shows that she may be of a low status. However the lady seems very cunning and rather cleaver to think of such a plan to fool a gentleman of a higher status. Both gentlemen use persuasion to try and get the mistress to make love to them. However they do this by using very different strategies. In 'To his Coy Mistress' the gentleman tries to persuade her through three stages, which correspond to the three stanzas. He uses different methods of and techniques in each one of these stanzas whereas in 'The Beggar Woman' the gentleman uses a lot of euphemisms similes and flattery throughout the poem. King's style of writing is also different to Marvell's due to this fact. King shows a lot of speed in 'The Beggar Woman', 'With speed' which make the words more emphasised to the reader. The general idea of both poems is to entertain the reader. However they both do this in very different ways, as 'The Beggar Woman' has a moral twist and 'To His Coy Mistress' is a purely entertaining light hearted poem. The effect of both poems on the reader is that it makes them understand how life was in the 17th century and how women could be treated in such a way just because of their status. In my opinion there are many similarities and yet many differences between the two poems. 'To His Coy Mistress' has been written very hyperbolically by Marvell, which to today's society makes it seem very desperate. However, King uses more euphemism to persuade the Mistress and does so in a much more basic way. ...read more.