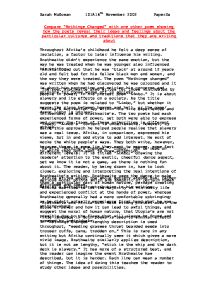 Compare &quot;Nothings Changed&quot; with one other poem showing how the poets reveal their ideas and feelings about the particular cultures and traditions that they are writing about

Compare "Nothings Changed" with one other poem showing how the poets reveal their ideas and feelings about the particular cultures and traditions that they are writing about Throughout Afrika's childhood he felt a deep sense of isolation, a factor to later influence his writing. Brathwaite didn't experience the same emotion, but the way he was treated when he was younger also influenced his writing. Afrika found out that he was 'black' at around 12 years old and felt bad for his fellow black men and women, and the way they were treated. The poem "Nothings changed" was written when he had discovered he was coloured and it is about him protesting and voicing his concerns and opinions for those worse off in society. ...read more.

As with "Nothing's Changed," "Limbo," can be read on different levels. It is titled "Limbo," drawing the readers' attention to the exotic, cheerful dance aspect, yet we know it is not a game, as there is nothing fun about it. The reader, by being drawn in, has to look closer, exploring and interpreting the real intentions of Brathwaite's writing. Brathwaite uses the dance to make serious moral points which are symbolic of certain human attitudes and ideas. Afrika writes about the whole society around him, rather than a particular part of human nature, perhaps creating more of a particular retribution in his writing. Afrika was lied to for the majority of his early life and experienced conflict at the hands of power, whereas Brathwaite generally had a more comfortable upbringing; as he didn't actually experience first hand what he was writing about. ...read more.

Each line can mean a number of things. The idea of doing this teaches the reader to study other ideas and possibilities. Afrika suggested that language had to try, as far as possible, to reflect the truth of an issue. In his writing style, thoughtless language and complex writing was avoided, and straight-forward wording is used. This technique was used in the hope of not misleading the reader and helped make the message as clear as possible. Brathwaite didn't do this with the same process. Instead he uses simple words in complex sentences to show multiple meanings. The main point that both these poems convey is the strong protest about issues in the writers' lives. Despite the very different contents there are many similarities between them. The poems were both very successful and were appreciated by a wide audience. Sarah McGowan 101A 16th November 2002 Paper2a ...read more.