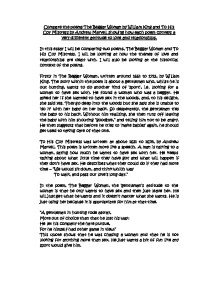 Compare the poems The Beggar Woman by William King and To His Coy Mistress by Andrew Marvell showing how each poem conveys a very different attitude to love and relationships. In this essay I will be comparing two poems, The Beggar Woman and To His Coy Mistress. I will be looking at how the themes of love and relationships are dealt with. I will also be looking at the historical context of the poems. Firstly in The Beggar Woman, written around 1663 to 1712, by William King. The story within the poem is about a gentleman who, whilst he is out hunting, wants to do another kind of 'sport', i.e. looking for a woman to have sex with. He found a woman who was a beggar. He asked her if she wanted to have sex in the woods, and, to his delight, she said yes. They go deep into the woods but she says she is unable to 'do it' with her baby on her back. So desperately, the gentleman ties the baby to his back. Without him realising, she then runs off leaving the baby with him shouting "goodbye," and telling him not to be angry. ...read more.

Because The Beggar Woman is like a story, it suggests that it should be read to people. This is again because it is aimed at lower class and uneducated people who would have to have someone read it to them rather than reading it for themselves. On the other hand To His Coy Mistress has no plot and uses imagery instead. Also imagery is used to put across his love and uneducated people would find it more difficult to understand. This is how Andrew Marvell cleverly chooses his audience. The poem is also written in the style of a speech, as if it is being read to one particular woman. "Had we but world enough, and time." This gives an example of how the poem uses words like "we" as if there were only two people there. To His Coy Mistress also uses "Coy" in the title, instead of shy, so if the reader doesn't know what this means they will immediately be put off. This again shows the aimed audience is upper-class people. "Sitting, says she, 's not my usual trade" is a quote from The Beggar Woman. This is everyday language, she could have said 'sitting is not my usual profession'. ...read more.

Also, when a poem tells a story, the author doesn't put across many of their feelings and emotions and it is difficult to know much about them. To His Coy Mistress uses a different writing style and structure. The structure is almost like an argument. It talks about thing that are completely opposite, for example, that you should enjoy yourself but that there are bad things like dying happening. It then goes on to say that because of both things you should live life to the full. Each poem could also be said to be giving out a message. However, these messages contradict each other. In The Beggar Woman, William King is saying that not many people have time for romance or love. Andrew Marvel, in To His Coy Mistress, says everyone should have time for love and romance but it is only there for entertainment value. Of he two poems, I prefer The Beggar Woman because it uses simpler language that is easier to understand. It is more like a story, which makes it easier to follow. To His Coy Mistress is more difficult because it uses more abstract concepts and ideas which do not make up a story. ...read more.