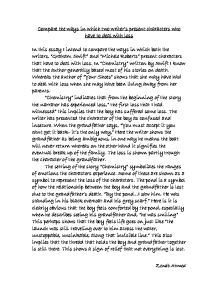 Compare the ways in which two writer's present characters who have to deal with loss In this essay I intend to compare the ways in which both the writers, "Graham Swift" and "Michele Roberts" present characters that have to deal with loss. In "Chemistry" written by Swift I know that the author generally based most of his stories on death. Whereas the author of "Your Shoes" shows that she may have had to deal with loss when she may have been living away from her parents. "Chemistry" indicates that from the beginning of the story the narrator has experienced loss," the first loss that I had witnessed" this implies that the boy has suffered some loss. The writer has presented the character of the boy as confused and insecure. When the grandfather says, "You must accept it you cant get it back- it's the only way," Here the writer shows the grandfather as being ambiguous, in one way he means the boat will never return whereas on the other hand it signifies the eventual break up of the family. The loss is shown partly trough the character of the grandfather. The setting of the story "Chemistry" symbolizes the ranges of emotions the characters experience. ...read more.

here the writer has made the reader feel "I thought: now we are going to face Ralph" just like the boy. The verb "composed" suggests that she may end the relationship with Ralph but instead she turned on grandfather "You're ruining our meal". The mother has made her decision and has chosen to support Ralph and lose the love of her own father. This signifies the break up of the relationship and also the way she deals with loss. In both the extracts "Your Shoes" and "Chemistry" the writers present the characters in many different ways. One of which is that in "Your Shoes" the mother is mourning and is failing to accept that the daughter has runaway. "There my darling, there. You're at home with mother, everything's all right." Clearly the mother is emotionally insecure. Here it is important to note that there is absolutely no use of punctuation. In contrast, "Chemistry" is where the narrator clearly does not understand the emotions of the mother. Similarly in the story "Your Shoes" the mother experiences loss in a way that she cannot bare the fact that she "doesn't know where" her daughter is, so instead she turns to the shoes that her daughter has left behind. ...read more.