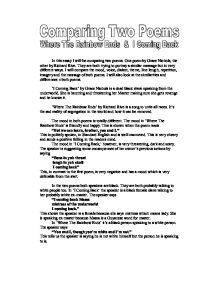 Comparing I Coming Back &amp; Where The Rainbow Ends

In this essay I will be comparing two poems. One poem by Grace Nichols, the other by Richard Rive. They are both trying to portray a similar message but in very different ways. I will compare the mood, voice, dialect, theme, line length, repetition, imagery and the message of both poems. I will also look at the similarities and differences n both poems. 'I Coming Back' by Grace Nichols is a dead black slave speaking from the underworld. She is haunting and threatening her Master making sure she gets revenge and he knows it. 'Where The Rainbow Ends' by Richard Rive is a song to unite all races. It's the sad reality of segregation in the world and how it can be removed. The mood in both poems is totally different. The mood in 'Where The Rainbow Ends' is friendly and happy. This is shown when the poem reads "But we can learn, brother, you and I." This is politely spoken, in Standard English and is well mannered. This is very cheery and sends a positive felling in the readers mind. ...read more.

She was tired of doing as she was told and now speaks the way in which she wants to. 'Where The Rainbow Ends' is about unity of all races and equality. The speaker would like everyone to be one and sing together regardless of their race. "We're going to sing together, brother, you and I" This shows the speaker wants everyone in the world to sing the same song. This is not a literal meaning but means the speaker would like everyone and everything in the world to be the same. The poem 'I Coming Back' is about contact from the underworld and 'coming back' with a vengeance. Saying one thing over and over again makes an impact in the reader's mind. The speaker is saying one thing but in many different ways to sink the thought into her ex-masters head. "mistress of the underworld I Coming Back" This is a scary thought and would stick in the reader's mind if they knew it was about them. The lines in 'Where The Rainbow Ends' are much longer than the lines in 'I Coming Back.' ...read more.

The poem 'Where The Rainbow Ends' is written later than 'I Coming Back. We can tell this because the poem by Richard Rive is written in a more complex way and also he is speaking freely. A long time ago black people weren't allowed to speak freely. The message in 'Where The Rainbow Ends' is actually a wish, a hope, a dream. Richard Rive is saying there is a place where people of all races are equal, but it's where the rainbow ends. A rainbow is circular and actually never ends. So there is no place where people of all colours are united. "Where the rainbow ends, There's going to be a place, brother, Where the world can sing all sorts of songs." This is a plea for unity but is unlikely to happen. The message of 'I Coming Back' is similar but is said in a much more intimidating way. "colour and race of all that is evil." This quote shows the narrator thought all colours should be equal and that r****m is evil. It is put in a terrorising way. Both poems carry a similar message and have many similarities. They are 2 totally different poems in the way they are written. Both demanding the same thing; equality. ...read more.