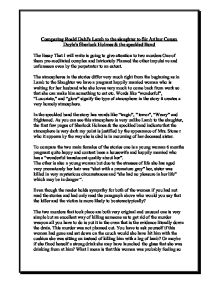 Comparing Roald Dahl's Lamb to the slaughter to Sir Arthur Conan Doyle's Sherlock Holmes & the speckled Band The Essay That I will write is going to give attention to two murders One of them pre-meditated complex and Intricately Planned the other impulsive and unforeseen even by the perpetrator to an extent. The atmospheres in the stories differ very much right from the beginning as in Lamb to the Slaughter we have a pregnant happily married woman who is waiting for her husband who she loves very much to come back from work so that she can make him something to eat etc. Words like "wonderful", "Luxuriate," and "glow" signify the type of atmosphere in the story it creates a very homely atmosphere. In the speckled band the story has words like "tragic", "terror", "Weary" and frightened. As you can see this atmosphere is very unlike Lamb to the slaughter, the first few pages of Sherlock Holmes & the speckled band indicate that the atmosphere is very dark my point is justified by the appearance of Mrs. ...read more.

The two murders that took place are both very original and unusual one is very simple but an excellent way of killing someone as to get rid of the murder weapon all you have to do is put it in the oven that is the evidence literally down the drain. This murder was not planned out. You have to ask yourself if this woman had gone and sat down on the couch would she have hit him with the cushion she was sitting on instead of killing him with a leg of lamb? Or maybe if she fixed herself a strong drink she may have launched the glass that she was drinking from at him? What I mean is that this woman was probably feeling so many emotions that she was anesthetized with Anger, Pain, hatred, desperation,- bitterness, These emotions are the definition of being lost, She was lost, She had no idea what she was doing she acted on impulse these are the actions of a lost desperate woman. ...read more.

The reader feels no sympathy for him he is hard-hearted and callous he has all the attributes of a typical villain. The other murderer is not only thinking for herself but her baby that is taking up residence in her womb, the reader has a lot of sympathy for her as they think how could this man leave his pregnant wife on her own he didn't even give a good reason which left her feeling bitter & rejected. Enough motive to kill? Only the reader can decide. I am going to compare the villains you may think that I already have but I have compared the murderers not the villains. One of the victims is a classic example of a villain big, strong, an erratic vicious temper, who is already suspected of killing his first stepdaughter. The other is a family man and a police constable who is expecting a child and seems happy to settle down with his wife who loves him very much, not such a typical ...read more.