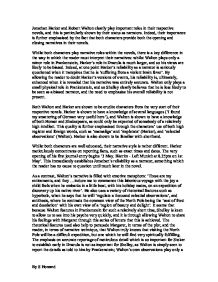 Comparing the presentation of Harker in Dracula and Walton in Frankenstein

Jonathan Harker and Robert Walton clearly play important roles in their respective novels, and this is particularly shown by their status as narrators. Indeed, their importance is further emphasised by the fact that both characters provide both the opening and closing narratives in their novels. Whilst both characters play narrative roles within the novels, there is a key difference in the way in which the reader must interpret their narratives: whilst Walton plays only a minor role in Frankenstein, Harker's role in Dracula is much larger, and so his views are likely to be biased. Indeed, at one point Harker's reliability as a narrator is seriously questioned when it transpires that he is 'suffering from a violent brain fever'. By allowing the reader to doubt Harker's versions of events, his reliability is, ultimately, enhanced when it is revealed that his narrative was entirely accurate. Walton only plays a small physical role in Frankenstein, and so Shelley clearly believes that he is less likely to be seen as a biased narrator, and the need to emphasise his overall reliability is not present. ...read more.

The rhetorical features used also help to persuade Margaret, in terms of the plot, and the reader, in terms of narrative technique, that Walton truly knows that visiting the North Pole will be a difficult expedition, but one which he will find very spiritually fulfilling. The emphasis on accurate reportage of meticulous detail which is so important for Stoker to establish early in Dracula is not as important for Shelley, as Walton is simply seen to report the details as told to him by Frankenstein; Walton's own observations play only a relatively small part in the narrative, compared to the crucial observations made by Harker. Harker's position in the novel of Dracula is crucially important, as it is his character who finally defeats the chief antagonist, and, indeed, it would not be unreasonable to see Harker as the chief protagonist of the novel. However, this position is very different to that played by Walton. Whilst both characters play an important part in the epistolary narrative of each novel, Walton's narrative function is very much more important that his function as a part of the plot. ...read more.

Similarly, Walton eventually abandoned his life-long ambition to reach the North Pole for the benefit of his crew, despite the fact that this leaves him 'ignorant and disappointed'. Whilst it is clear that he was under duress to do so because of the threat of mutiny amongst his crew, it would perhaps have been possible for him to insist that they continue, and so risk the lives of his crew. Instead, like Harker in Dracula, he shows compassion and decides that it is better not to risk the life of innocent human beings for his own ends. Harker and Walton clearly play important roles in their respective novels, and have many similarities in terms of their characterisation. However, due to their differing functions within the novels as a whole, we see that Stoker and Shelley make their own characters to serve their given purpose, which inevitably leads to many differences in the two characters. Because of their appropriate characterisation, Walton and Harker, both central characters in their respective novels, fulfil their roles very successfully. By S Howard ...read more.