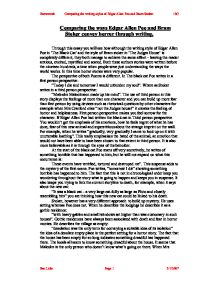 Comparing the ways Edgar Allen Poe and Bram Stoker convey horror through writing. Through this essay you will see how although the writing style of Edgar Allen Poe in 'The Black Cat' and the style of Bram stoker in 'The Judges House' is completely different, they both manage to achieve the same effect - leaving the reader anxious, excited, mystified and scared. Both these authors stories were written before the nineteen hundreds, a time when people were just understanding the ways the world works. In this time horror stories were very popular. The perspective of both Poems is different. In The black cat Poe writes in a first person perspective: "Today I die and tomorrow I would unburden my soul". Where as Stoker writes in a third person perspective: "Malcolm Malcolmson made up his mind". The use of third person in this story displays the feelings of more than one character and you can build up more fear than first person by using devices such as rhetorical questions by other characters for example when Mrs Cranford cries "not the Judges house!" it creates the feeling of horror and helplessness. First person perspective makes you feel sorrow for the character. ...read more.

The only difference between Pluto and the new cat was a white splodge on its belly. It turns out later that this splodge is actually a image of gallows. The image grows in size until the character can clearly make out the image. his realisation of what this means is clearly shown in this quote "Gallows! - oh mournful and terrible engine of horror and crime - of agony and of death." He has realised his fate - death. He feels remorse for what he had done to Pluto. He knows that this 'beast' is an image of Pluto. A symbol of god: "a brute beast to work out for me-for me, a man fashioned in the image of the high god - oh insufferable woe! He believes its is god in disguise of a cat" Stoker also uses supernatural elements. Every night the rats come out and make a lot of noise. They run up and down the alarm bell. They all stop suddenly a run away as a giant rat comes down the alarm bell. The rats are scared of this larger rat indicating that this rat is evil. Stokers description of the rat makes it sound evil: It showed its great white teeth and its cruel eyes shone in the lamplight. ...read more.

I prefer the descriptive writing of Stoker because it creates an image in your mind. Especially with the weather. Stoker uses the weather to great effect. When the thunder was lashing down toy could tell something bad was going to happen. This effect is used in a lot of horror stories. In my opinion, I prefer Stokers method of creating horror. I think the introduction of characters brings in a new element to the story. It creates an atmosphere of bewilderment and isolation. I say isolation because everyone seemed to know what was going on but Mr Malcolmson. However, as a whole I think I preferred The Black cat by Edgar Allen Poe. I think this is because I am used to modern stories, and this storyline is a bit more advanced and modernised than The Judges House. As I am used to modern horror stories I can relate to this story better. I think that the plot has some realism to it, more so that Stoker's story. I don't think Stokers story was linked together very well and it all seemed a bit distant. Homework Comparing the writing styles of Edgar Allen Poe and Bram Stoker. 10G Ben Luke Page 1 5/1/2007 ...read more.