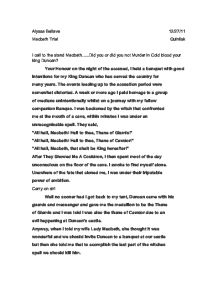 Alyssa Bellave 12/27/11 Macbeth Trial Quinlisk I call to the stand Macbeth......Did you or did you not Murder in Cold blood your king Duncan? Your Honour on the night of the accused, I held a banquet with good intentions for my King Duncan who has served the country for many years. The events leading up to the acusation period were somewhat distorted. A week or more ago I paid homage to a group of medians unintentionally whilst on a journey with my fellow companion Banquo. I was beckoned by the witch that confronted me at the mouth of a cave, within minutes I was under an unrecognisable spell. They said, "All hail, Macbeth! Hail to thee, Thane of Glamis!" "All hail, Macbeth! Hail to thee, Thane of Cawdor!" "All hail, Macbeth, that shalt be King hereafter!" ...read more.

So what happened when Duncan came that night? Well it started off perfectly, we had a big banquet with entertainment and the king was smiling and enjoying himself so much but my wife came over to me and asked when I was going to do the deed. I told her I didn't want to but she insisted so much that I had to say yes. We both agreed that it would be done by drugging the guards, then killing the king and putting the daggers stained with blood in their hands so it looked as if they had commited the crime. So did your plan work? Well everyone was asleep and my wife and I went outside, I had a dagger and went to the tower. I could see a vision of a dagger in the air, it was as if it was leading me to Duncan. ...read more.

We heard a knocking at the south entrance so quickly we retired to our chamber. It was Macduff at the gate and the porter had answered, I went back downstairs and Macduff asked if Duncan had stirred from his sleep, I said he wasn't and I led him to the tower where he saw the the king on the floor with blood still dripping from his pale white body. Macduff was very shocked and I was told to ring the alarm bell, as I went out I saw the two guards on the floor stirring and shouted to Lennox to see them. So both of them thought the guards had killed him? Yes, that was the nature of it I have no further questions for Macbeth, I now ask the jury to reach a verdict on Macbeth's fate. The Jury think the Macbeth should be put to death tomorrow morning without delay The case is closed ...read more.

I really like the candidates approach to this piece, the use of the trial is an excellent idea and a great way to hear the story from MacbethÃ¢â‚¬â„¢s point of view. However I feel that it would have been more ...

I really like the candidates approach to this piece, the use of the trial is an excellent idea and a great way to hear the story from MacbethÃ¢â‚¬â„¢s point of view. However I feel that it would have been more appropriate to try and use similar language to that used by Shakespeare in the play Ã¢â‚¬ËœMacbethÃ¢â‚¬â„¢, in this why it would feel more realistic. It is quite clear that this is taking place in a court room but it would have been interesting to set the scene and describe, whats happening, perhaps it could start with Macbeth being brought into the court room, this would add some drama.

The use of quotations to aid in the retelling of MacbethÃ¢â‚¬â„¢s story is a nice touch, especially in the beginning when Macbeth is describing how he felt the witches were putting him under a spell. I think this is an interesting idea and perhaps something the candidate should have pursued further. In addition everything needs to be in speech marks, as the throughout the piece, people are talking to one another. I like the use of different fonts, so that it is clear when Macbeth is talking and when he is being asked questions.

This is a well written piece and it flows nicely. There is some issue with spelling but this is minor. The candidate has attempted to use a higher vocabulary, although this feels a little forced and IÃ¢â‚¬â„¢m not sure that it works. For example the word Ã¢â‚¬ËœiriputableÃ¢â‚¬â„¢ is used at the end of MacbethÃ¢â‚¬â„¢s first speech, it should be spelt irreputable (which means to have no reputation) and I think something like compelling (to have an irresistible/overpowering effect) would work better here.