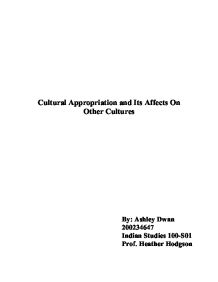 Cultural Appropriation and Its Affects On Other Cultures.

Cultural Appropriation and Its Affects On Other Cultures By: Ashley Dwan 200234647 Indian Studies 100-S01 Prof. Heather Hodgson This past Halloween I dressed up as a China Doll; in my black traditional Asian dress, white painted face, rosy pink cheeks, black eyeliner, and my hair held up in a bun with chopsticks. I originally thought that this costume would be rather attractive and fun. However, I began to question myself after a young lady approached me and asked, "Are you suppose to be an Asian person?" I immediately replied, "No, I am a beautiful China Doll". Did people believe that I was "attempting to portray a stereotyped representation of another race"?1This is not what I had intended and this now had disturbing implications. I had attended the party earlier with a Chinese friend of mine. He took no offence to what I was wearing- this was I later found out after questioning him. So when does cultural "borrowing" become ignorant appropriation? This also brings up the questions of: Can cultural appropriation be defined and can it be avoided? With the new fads of Chinese character tattoo's, Hindu god t-shirts, and the selling of such things as Native sweat lodge kits and ceremonies, does this not show that North Americans can appreciate other cultures and that western culture has become a product of a multicultural society.1 Through examples of film and art, sports, and religion, I will answer the following questions and specifically how cultural appropriation has affected North American First Nation peoples. There is much confusion when it comes to the meaning of cultural appropriation. The literal meaning begins with Culture-Anthropological: the sum total of the attainments and learned behaviour patterns of any specific period, race or people; Appropriation's meaning is to take for one's own use.2 Most people today then know cultural appropriation then as "to take someone else's culture to use for your own purpose".2 I believe that the argument is not that appropriation is "stealing", as some people claim, but that it does matter how a person goes about putting to use the knowledge gained from another culture. ...read more.

Do my experiences amount to nothing simply because I am not native? "I make a distinction between exploitive readings of my experience and readings that emerge out of dialogue and harvest interaction founded on common humanity."8 Much of what children learn about Natives is set with the imagery in "games and pastimes, from story books and school books, to summer camp and more recently comic books, television and movies".6 The previous points that I have written about movies state how minority cultures are being appropriated and further more school books rarely, if any, actually tell the true story of cultures like the First Nation peoples of Canada. " Few children in Canada had any direct knowledge of Native people, who were pretty much confined to their reserves at the margins of society... while kids were exposed to images of the Indian created by various white writers and educators".6 As not all images were negative they were not all positive either and represented "the concerns and prejudices of White adult society instead of actual Native Canadians."6 This is when cultural appropriation needs to be seriously addressed, stealing a culture to take for one's own use and distort it from it's authentic and original form for profit is wrong. I am not stating that artists should not learn from other cultures and be influenced to create but when a piece of that culture is deliberately changed to suit only their needs and personal profit can harm that culture's image and should be considered wrong. This is better said by Kwame Dawes, "...these works (folk songs, tales, and written collections) are flawed by the heavy-handed application of western values, prejudices and belief systems to the interpretation of the folk ways of non-white people. This, coupled with the exploited absence of accountability to the people being written about, and the lack of respect for their values, has generated work that is at best poor and unreliable quality and at worst simply offensive and totally destructive."8 This may now ...read more.

There are still other examples of cultural appropriation such as GM's car named the "Pontiac". This car was named so after Pontiac a well known Indian Chief. Though there was no insult intended in the image the company still" appropriated an actual historical character and turned him into a commercial icon of the industrial age, A figure who once led an unprecedented resistance against White civilization is now a symbol of that civilization".6 These are just a few of the examples in which Indian images are used to represent what non-Natives have come to think about Indians, and that they are now appropriated by non-Natives as meaningful symbols of their own culture.6 There is nothing wrong with learning about another culture or adopting different aspects as long as it is done with the correct understanding and respect the culture deserves. Making blanket statements about cultural appropriation should be avoided as I have pointed out numerous different forms. "Cultural Appropriation is sometimes to be condemned" but at the same time you cannot restrict people to simply live only their own culture. "Cultural Appropriation is inevitable, but superficial possession of a culture's image, without understanding its significance, can be insulting and ridiculous".1 One cannot help but be influenced by other cultures but as I have said before without permission or proper representation Cultural Appropriation might as well be referred to as stealing. When we can turn our minds to Cultural Appropriation and deal with the issue we will start to see changes for the better. "When Cultural Appropriation is counteracted by the qualities of respect, sensitivity and equal opportunity, the result is work that is wonderfully developed and filled with richness of cultural interaction."8 Cultural appropriation can be avoided but there are differences between stealing, borrowing, and given permission to take. It is only natural to be intrigued and interested in another culture, but understand that just as you do not want your image to be misrepresented or your values to be held in disregard neither does any other culture. ...read more.