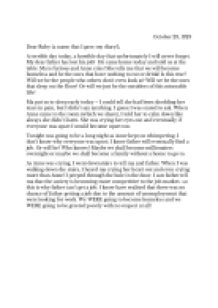 Transfer-Encoding: chunked ﻿October 29, 1929 Dear Ruby (a name that I gave my diary!), A terrible day today, a horrible day that unfortunately I will never forget. My dear father has lost his job! He came home today and told us at the table. Ma is furious and Anne cries! She tells me that we will become homeless and be the ones that have nothing to eat or drink! Is this true? Will we be the people who others don?t even look at? Will we be the ones that sleep on the floor? Or will we just be the outsiders of this miserable life? Ma put us to sleep early today ? I could tell she had been shedding her tears in pain, but I didn?t say anything. I guess I was scared to ask. When Anne came to the room (which we share), I told her to calm down like always she didn?t listen. She was crying her eyes out and eventually if everyone was upset I would become upset too. Tonight was going to be a long night as Anne kept on whimpering. I don?t know why everyone was upset; I know father will eventually find a job. Or will he? Who knows? Maybe we shall become millionaires overnight or maybe we shall become a family without a home to go to. ...read more.

Father seems to be awfully distressed; it perhaps might be because father?s friends have still got jobs. They work in highly rich offices and so I don?t think they will interfere with our family or get involved to help us out. Gran used to say that if men were unemployed or lost their job then they should feel ashamed of themselves as they have become a failure and their status has fallen. I don?t know if father?s status has fallen but I know that he shouldn?t feel ashamed of himself as it isn?t his fault at all. It is that President Herbert Hoovers fault like the teachers said at school! At this very moment, I am packing all of my pictures and memories that I have of this home and of school. We are only aloud to pack a limited amount of things so I decided to pack my pictures (as I said), my favourite clothes and shoes and of course you. It is time to move out so I best go and until tomorrow my special friend. 31st October 1929 Dear Ruby, Let me tell you about my new house, it was built by father and a few other kind men. First of all, we were going to live in a crowded apartment which wasn?t especially nice at all. ...read more.

I asked Natasha, who is 2 years older than me, why this happened to get a clearer view of why father lost his job. She explained to me that everything was going to become alright and that I shouldn?t worry about everything as I wouldn?t understand. As father doesn?t have a job he goes round helping others build Hooverviles. He would?ve asked money from them to do so, but as they are poorer than us father told ma not to think about it. It can be lonely here at times but I just wonder around the town or help father build objects for the house. I miss my school and friends dearly but I am going to have to get used to not being with them as this is my life now. Today is Halloween and every year we celebrate it but as we have become poor I thought to not mention it to ma or father. When I came back for dinner today, Anne (as I knew she would) had asked ma if we could celebrate Halloween surprisingly ma said we could. Even if we were poor we could still celebrate Halloween with the bits and bobs that we had around the house and ma insisted that we did. Anyway before I go out to scare other kids around the town, I am positively certain that everything will become better and I will pray to God to make lives better and to make this town a steady home to live in. ...read more.