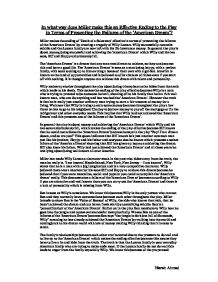 Death Of A Salesman

In what way does Miller make this an Effective Ending to the Play in Terms of Presenting the Failures of the 'American Dream'? Miller makes the ending of 'Death of a Salesman' effective in terms of presenting the failures of the 'American Dream' by creating a tragedy of w***y Loman. w***y successfully commits suicide and the Loman family are now left with his life insurance money. In general the play is about money, being successful and achieving the 'American Dream' which w***y and his two sons, Biff and Happy unfortunately fail. The 'American Dream' is a dream that any man would want to achieve, so they can become rich and have a good life. The 'American Dream' is seen as a man being happy, with a perfect family, with sons looking up to him owning a house of their own with a garden. America is known as the land of opportunities and is believed to offer chances of riches even if you start off with nothing. It is thought anyone can achieve this dream with talent and personality. w***y makes up stories throughout the play about being triumphant as he hides from the truth which leads to his death. This makes the ending of the play effective because w***y is a man who is trying to pretend to be someone he isn't, showing off to his family that he is a rich well known man, who can do anything and has reached the 'American Dream'. ...read more.

This tube represents the truth because it tells us that w***y has been trying to kill himself and has even failed as that. Linda says "Biff" as soon as the tube is out in the air indicating that she is the one hiding the tube from the family and not wanting to discuss the matter. The stage direction says after that line "Linda turns away from them, her hands covering her face" Miler illustrates that Linda is trying to hide from the truth by using her hand and turning away from it. Happy's reaction to the tube was him saying "You crazy" telling the audience that Happy also wants to hide behind all the lies and act as if nothing ever happened going back to their illusion of their perfect family. Another prop used to represent the truth is the flowers. This makes the ending of 'Death of a Salesman' effective because when Happy and Biff come home after leaving their dad alone in the restaurant they were meant to eat in but instead left with some girls, Happy comes home with some flowers for his mother, Linda. Linda knocks the flowers out of Happy's hands out of anger. Linda starts to clean up the mess she has made then realises she has cleaned up enough of her sons messes "Pick up this stuff, I'm not you maid" Linda says. ...read more.