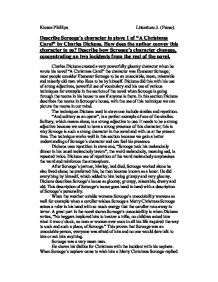 Kieren Phillips Literature.3. (Prose). Describe Scrooge's character in stave 1 of "A Christmas Carol" by Charles Dickens. How does the author convey this character to us? Describe how Scrooge's character changes, concentrating on two incidents from the rest of the novel. Charles Dickens created a very powerfully gloomy character when he wrote his novel "A Christmas Carol" the character was Ebenezer Scrooge; most people consider Ebenezer Scrooge to be an unsociable, mean, miserable and miserly old man who likes to be by himself. Dickens did this with his use of strong adjectives, powerful use of vocabulary and his use of various techniques for example in the section of the novel when Scrooge is going through the rooms in his house to see if anyone is there. In this section Dickens describes the rooms in Scrooge's house, with the use of this technique we can picture the rooms in our mind. The techniques Dickens used in stave one include similes and repetition. "And solitary as an oyster", is a perfect example of one of the similes. Solitary, which means alone, is a strong adjective to use. It needs to be a strong adjective because we need to have a strong presence of this character; this is why Scrooge is such a strong character in the novel and with us at the present time. ...read more.

Another incident in which Scrooge's meanness is shown is when he grudgingly gives his clerk the day off for Christmas. Scrooge shows his meanness and also his miserliness here because he reluctantly gives one of his employees the day off on Christmas day and he also wants to make money on the day when no one is really going to be buying things. The author portrayed Scrooge's miserliness by saying that Scrooge made an undoubted bargain on the day of his partner, his only friend Marley's funeral. Instead of mourning the death of his work partner and best friend he is working and making bargains. "Darkness is cheap and Scrooge liked it". In his counting house Scrooge kept his fire very low on a very cold day not wanting to buy any more coal for the fire, not wanting to waste money on only a fire. He kept the coal bucket in his office so when an employee came in and asked for more coal for the fire in their work quarters he would refuse and even threaten to fire them because he did not want to waste money because he liked to keep his money tight to him. At home he also showed his miserliness by keeping his fire very low not wasting any coal. ...read more.

This is because, when Scrooge saw that when he was given things when he was younger, how much happier the things made him. Scrooge thought he had a bad childhood but he didn't it was that he just didn't want to remember it. After being taken back to his past Scrooge became a nicer person. In the second incident I have chosen, the third spirit comes to take Scrooge to the future. They visit Scrooge's grave. Scrooge finds out that no one had visited his grave. Scrooge starts to think about what he had said to people to make them upset and not visit his grave. He realizes that his actions as well as his words had upset people and established him as a mean person to others. So from then on Scrooge became a much nicer person all together. Scrooge had changed from our first thoughts of him, which were that he was a miserable, cruel, mean, miserly and hard old man to a nice, kind, and thoughtful old man after visiting his past, present and future. Dickens establishes Scrooge's character in stave one of the novel "A Christmas Carol" the first thought sticks with us for the rest of the novel because Dickens is such a successful writer. In conclusion this shows how powerful and strong Dickens' writing is he uses a variety of good and useful techniques to vary his writing and establish Scrooge's character. ...read more.