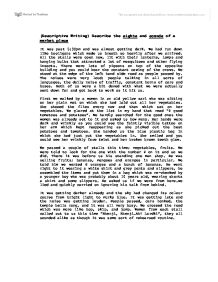 (Descriptive Writing) Describe the sights and sounds of a market place

(Descriptive Writing) Describe the sights and sounds of a market place It was past 5:30pm and was almost getting dark. We had run down like hooligans which made us breath so heavily after we arrived. All the stalls were open now, lit with their lanterns, lamps and hanging bulbs that attracted a lot of mosquitoes and other flying insects. There were lots of pigeons on top of the opposite building and you could hear the constant cawing of the crows. We stood at the edge of the left hand side road as people passed by. The noises were very loud; people talking in all sorts of languages, the daily noise of traffic, constant horns of cars and buses. Both of us were a bit dazed with what we were actually sent down for and got back to work as it hit us. ...read more.

There it was before us his standing one man shop. He was selling fruits; bananas, mangoes and oranges in particular. We told him we wanted 6 oranges and a bunch of bananas. He went right to it wearing a white shirt and grey pants and slippers, he assembled the items and put them in a bag which was re-checked by a younger boy who was probably about 10 years old, wearing shorts a shirt and some slippers. He asked us if we were from here...we lied and quickly carried on ignoring his talk from behind. It was getting darker already and the sky had changed its colour course from bright light to murky blue. It was getting late and the noise was getting louder. People passed, cars honked, the temple bells rang, and it was all very busy. We crossed the road which was more like hop, skip, and jump. ...read more.

They all wore either bangles, chain or a "piyal" (anklet).They all seemed to have tattoos on the arms, mostly written in Hindi script. We got our things and crossed the road once again. The overall noise was not getting any softer and the amount of people that came by also increased. The shop lights were switched on all around and the traffic and noise pollution had also increased. The puddles on the road had got my feet dirty and I was going to take a shower. We started to walk and it started raining out of the bloom and there it was. People got out their umbrellas, started covering their stalls, put on their wind-sheeters, ran towards shelter and everything had changed within a second. All The stalls were now covered with what they could manage and all the flies had settled on their food. They all had sheets of blue plastic that covered up their tiny stalls and themselves. The rain was heavy and people had drifted apart and the raging sounds of the rains could be heard everywhere. ...read more.

This is a very good essay, requiring only a little editing to make it excellent. The simple narrative maintains interest and escorts the readers through a series of scenarios, effectively evoking the colour and bustle of the busy Indian market place.