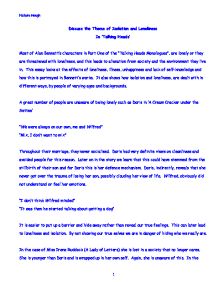 Discuss the Theme of Isolation and Loneliness In 'Talking Heads'.

Discuss the Theme of Isolation and Loneliness In 'Talking Heads' Most of Alan Bennett's characters in Part One of the "Talking Heads Monologues", are lonely or they are threatened with loneliness, and this leads to alienation from society and the environment they live in. This essay looks at the effects of loneliness, illness, unhappiness and lack of self-knowledge and how this is portrayed in Bennett's works. It also shows how isolation and loneliness, are dealt with in different ways, by people of varying ages and backgrounds. A great number of people are unaware of being lonely such as Doris in 'A Cream Cracker under the Settee' "We were always on our own, me and Wilfred" "Mix, I don't want to mix" Throughout their marriage, they never socialised. Doris had very definite views on cleanliness and avoided people for this reason. Later on in the story we learn that this could have stemmed from the stillbirth of their son and for Doris this is her defence mechanism. Doris, indirectly, reveals that she never got over the trauma of losing her son, possibly clouding her view of life. Wilfred, obviously did not understand or feel her emotions. "I don't think Wilfred minded" "It was then he started talking about getting a dog" It is easier to put up a barrier and hide away rather than reveal our true feelings. This can later lead to loneliness and isolation. By not showing our true selves we are in danger of hiding who we really are. ...read more.

She is actually able to offer sympathy and help to others. At the beginning of the monologue she feels pain and loneliness like Doris in A Cream Cracker under the Settee but at the end she feels connected and part of something. Both these women seem to miss the days of contact with their neighbours. The times when you could leave your door open and nobody would walk in. Both characters crave what they used to have. Due to their natures, it would not occur to them to change with the times. It did not occur to them to form relationships, by making friendly gestures to their neighbours. Doris is different from the other characters as she goes to the extreme of isolating herself. This is illustrated by the fact she wants trees in her front garden but actually puts bushes to stop any intrusions. Susan is the vicar's wife in 'In Bed amongst the Lentils' and her unhappiness/loneliness is harder to analyse. Alan Bennett here show that Susan is a witty and complex character. She is not so helpless that she could not have avoided a loveless marriage and a role, tying her to the church in which she has lost faith. Her disappointment seems to relate to her whole world and she uses drink to mask her loneliness and as a means to escape the real world. Susan is younger than Doris and Irene and by the end of the monologues you are left with the feeling that Doris and Irene are her future. ...read more.

Loneliness by these characters is brought on by their lack of self-knowledge. This may contribute to both their sadness and the comedy of the narrator. It is perhaps part of their strategies for survival that the narrators do not see themselves as pitiable and lonely. The main themes of Bennett's, Talking Heads, are loneliness and the failure to understand one's own life. He also pays respect and attention to the point that there is a 'Little Person' inside us all - sometimes, foolish, wilful, vain, mistaken and self-deluded. The narrator's problems may be the problems of ordinary people and often, unfortunate people at a particular point in time. I found that the each narrator touches on everyday issues that effect us all and that's why when reading Talking Heads you don't know whether to laugh or cry at the issues raised. Bennett tackles things with a light-hearted view but gets his point across in a very meaningful way. In conclusion Bennett is showing us that loneliness can apply to anyone and in different forms. The way he has chosen to show loneliness may be a product of male domination within personal relationships. I personally feel he could have written from this perspective because he is male. Also, most of Bennett's plays make the audience aware of the organisations that are provided by the State to cope with the needs of the characters. These efforts are seen as a poor substitute for a family, friends and neighbours. These characters don't have this support and this may be the root of their problems. Natalie Hough 4 1 ...read more.