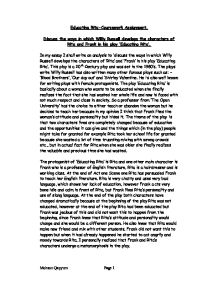 Discuss the ways in which Willy Russell develops the characters of Rita and Frank in his play 'Educating Rita'.

The reason why Rita wanted to be educated is because as mentioned before she wants to gain the respect of a true educated person and lives her husband 'Denny' who persuades her to think that all he wants is children but all Rita wants at the time is the same thing in which Frank wanted or got; knowledge, "Denny found out that I was on the pill again, it was my fault I left my prescription out. He burn't all my books. Most of Rita's family is uneducated and stay in pubs most of the time but Rita's mother also realizes the same thing Rita has, when one time Rita was in a pub with her family and are singing songs, her mum says to Rita, " There are better songs to sing than this", which basically means that the family can do better in life, the phase could also be a metaphor. Even though, at the beginning of the play, Rita is so hungry for seeking knowledge she still lacks confidence because she thinks that she will not fit in with the other students and might not impress Frank. There are also family problems, the fact Denny, Rita's husband, does not agree with Rita taking tutorials because he feels that it is a complete waste of time and this effects her confidence because she has to take time of work without Denny knowing, also Rita has no family support. ...read more.

is presented on the title of Mary Shelley's classic novel, which is Frankenstein and in the novel creates a monster whom he cannot control and Frank is comparing the monster to Rita because he cannot control her from being educated or going to summer school, "I shall insist upon being known as Mary, Mary Shelley". In my opinion, the play has got a slight twist to it, when the role reversal is consumed within the play, but overall the play is quiet entertaining and typical because it was set in the 1980's which was the ere full of plays and new but twisted plays. This was the same for media when computer graphics enables films to be made more action packed and less dangerous. I also think that Rita did slightly change for the better because she was more confident in herself and passed the English Literature exam easily. From the education she learned, I think that she has more knowledge, respect, and talks formally and is a second-class citizen. The final aspect in which I shall analyze is about the affect the play shall have on the audience after they have completed reading 'Educating Rita' by 'Willy Russell'. I think the play might make the audience think that education is very valuable, important, gains you respect and class in society. Mohson Qayyum Page 1 ...read more.